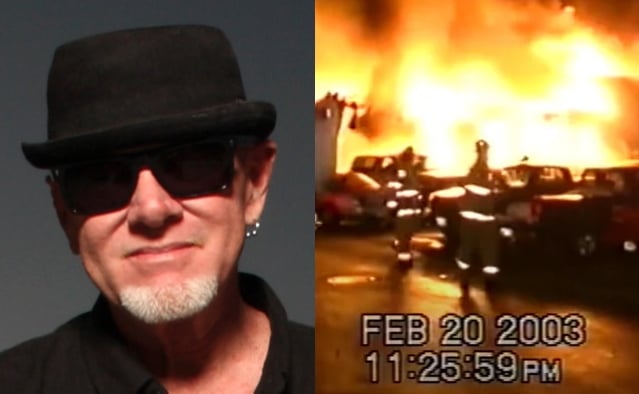 GREAT WHITE guitarist Mark Kendall spoke to the "Sally Steele Rocks! Show" about the deadly blaze on February 20, 2003 in Rhode Island caused by pyrotechnics at a concert by the now-former GREAT WHITE singer Jack Russell. At the time of the fire, the group that was on the road was called JACK RUSSELL'S GREAT WHITE. Kendall, who founded the band with Russell in 1982, later said he was asked to join Russell and his solo band on the tour to help boost attendance.

"I think people misunderstood, thinking GREAT WHITE uses pyro," Kendall told "Sally Steele Rocks! Show". "Because we've never used it before. And the main reason is we're not a spectacle kind of band. We just want… Give us a lot of lights, maybe a little fog on the ballad and girls backstage. That's pretty much the end of GREAT WHITE. We don't go blow stuff up and whatnot. So it was kind of strange. But it was [Jack's] solo thing. All the merchandise he had was all Jack Russell — Jack Russell CD, Jack Russell t-shirt, picture behind us…"

According to Kendall, the tour was initially billed just "the Jack Russell 'For You' tour," named after Jack's second solo album, which came out in 2002. "And when I went out there, not even realizing… After I did three or four shows, I saw a flyer that said 'Jack Russell's GREAT WHITE,'" Mark recalled. "And I even called the manager, I go, 'You're calling it 'Jack Russell's GREAT WHITE'?' I go, 'Whatever. That's cool.' But the night of the accident, they actually put 'GREAT WHITE' on the marquee, and I think that's where the confusion came. But I didn't know anyone in [Jack's solo] band; I just met 'em for the first time [on that tour]."

Russell's bandmate Ty Longley (guitar) was one of the people who perished in The Station blaze, which became the fourth deadliest fire in U.S. history.

In 2008, the band agreed to pay $1 million to survivors and families of the victims of the fire.

Elaborating on what he saw that tragic evening, Kendall said: "It was very mild looking [at first], but I felt heat and I never felt heat before with this stuff, and so I knew there was something wrong. So I went out through the back door to get out of everybody's way so they could put it out. I thought maybe they'd have a fire extinguisher. 'Cause I saw on the wall it was just a very small part of the foam [that] had caught fire, and I thought for sure they would just put it out. But when they opened the doors… This whole place was lined with this black foam stuff, and come to find out later — of course I didn't know it then — but the fire marshal said it was equal to 13 gallons of gasoline on the wall or something. So when they opened doors, the backdraft or whatever made it just go up. And it was just horrific, man. I don't like to think about it."

The fire at The Station nightclub in West Warwick began in an overcrowded club when pyrotechnics from Russell's GREAT WHITE ignited illegal soundproofing foam lining the club's walls.

"I've seen so many video tapes of pyro shooting off in that club with the foam — bigger stuff than we had — and it never happened," Jack told Psycho Babble TV a few years ago." Why it happened that night… Who knows? I mean, it's like a plane crash — it takes all these little things to fall in line for that one big thing to happen. So [the movie] gave me the opportunity to talk about how I felt and for me to apologize. Not a guilty apology, but because I just…

"I mean, I feel horrible that it happened," he continued. "I lost a lot of friends that night — a lot of friends. People that I didn't even know were even there. And people have said, 'Well, he's not remorseful.' And they've gotta understand, when all this went down, my legal team, they said, 'You cannot ever say you're sorry, because it implies guilt.' And I'm, like, 'But I am sorry.' [And they told me], 'But you can't say it.'"

According to Russell, at least one "really beautiful" thing came out of the tragedy. "There was a man named Joe; they call him 'The Lizard Man,'" Jack said. "He was the worst, most badly burned of all the people. And he met his wife in the fire and they had a beautiful son. And his comment was, 'If this wouldn't have happened, I wouldn't have met the love of my life.'"