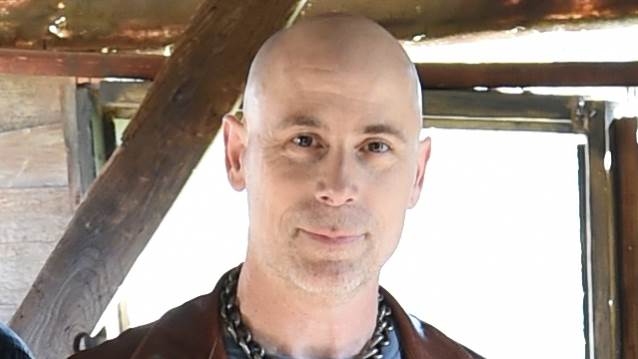 JOHN BUSH: 'I Treasure My Years In ANTHRAX'

ARMORED SAINT vocalist John Bush recently spoke with 69 Faces Of Rock about his years fronting ANTHRAX. The full conversation can be seen below. A few excerpts follow (as transcribed by BLABBERMOUTH.NET):

On how he came to join ANTHRAX:

John: "I had a reputation for being the singer in ARMORED SAINT, [and] I guess they thought it would be a nice combination with their music, so they sought me out when they parted ways with Joey Belladonna in 1992. It was difficult for me to actually leave ARMORED SAINT because we [have] such a close-knit bond, but after a lot of thought and hearing the material that they were writing for 'Sound Of White Noise', it felt like the right time for me to take the plunge."

On wanting to be more than just a "hired gun":

John: "It was important for me to still be very involved in the songwriting. That was my prerequisite of joining. I didn't want to just be dictated, 'Hey, sing this.' I never did that. In the past with [ARMORED] SAINT, I primarily wrote 90 percent of the lyrics [and] had some hand in songwriting and arrangement. That was important to me to do that. I didn't want to just [be like], 'Hey, I'm here — tell me what to sing.' I think that they wanted that — they were embracing that. It was natural."

On what he felt he brought to ANTHRAX:

John: "I don't know if I thought about what I was actually going to add, but I think it was more about bringing my style and my personality to the band and letting it all kind of happen organically."

On the reception to "Sound Of White Noise":

John: "Some people aren't fond of singer changes. I'm probably somebody myself who felt the same way sometimes. But that's what happens in life with bands. There's personnel changes, and certainly making a singer change changes the sound of the band to some degree. There's no denying it. The music sounds the same, but the voice is different. I think some people embraced it. Maybe some old-school fans had a hard time with it, but it was what it was."

John: "A lot of things changed. [Guitarist] Dan Spitz left the band, and Elektra Records fired probably 25 percent of the staff, including our A&R guy and the head of the label. We were in upheaval, and in a nutshell, the label head that took over there basically said candidly to us that she wouldn't even have done the deal with ANTHRAX. So we knew putting this record out, we had some pretty high mountains to climb, and I think the response to it was good, but the label did a terrible job with it, because they didn't care. I think there are some great tunes on it. Certainly powerful, maybe not quite as cohesive as 'Sound Of White Noise', but still some great tunes."

John: "We changed to another label. This was a label that didn't last very long and went belly-up. I think that also contributed to the lack of awareness of this record. I think this is also a great record. 'Inside Out' and 'Catharsis' are some of my favorite songs I ever did with ANTHRAX. [It's a] diverse album."

On the vibe in the band at the time:

John: "I think we believed in ourselves still. We kept touring and kept working. You're only as strong as your weakest link, and your weak link is a record company that's pretty weak, so that certainly big-time worked against us. But we trudged on."

John: "Great record. It was Nuclear Blast in Europe who put it out, but in the States, it was a label called Sanctuary, who also went under. Two labels that went under — not good for a band's career. It did great in Europe, and there was a great vibe in America. It's a cool record — lots of different types of songs. We brought in Rob Caggiano, and he added a lot to it as a lead guitar player and personality. I think it's maybe one of the best [ANTHRAX] records."

On parting ways with ANTHRAX:

John: "I think they were ready for a reunion. Maybe there was a little bit of a push from outside people suggesting it. People love nostalgia. We put out 'Return Of The Killer A's', and that was like a greatest hits between me and Joey's eras of music, and there was a time at that point where we talked about doing a tour where we'd both go out and sing our stuff — I'd come out and sing, then he'd come out and sing, or vice versa. It didn't come to fruition for whatever reason. There was the idea of doing it again [after releasing 'The Greater Of Two Evils', which saw ANTHRAX re-record older material with Bush's vocals], and that's when I just said, 'I'm not into it. I don't want to do it. If you feel like you want to have a trip down nostalgia lane, I understand completely, but do it with Joey.' I already entertained that, and I just wasn't into it at the time."

On his relationship with ANTHRAX today:

John: "It's fairly distant. I just saw Frank Bello the other night in New York. He came to our [ARMORED SAINT] show. It was great seeing him. I jumped off stage, gave him a hug. We talked a lot after the show. Me and Frankie were very close. I was very close with all those guys when I was in the band. I see Scott [Ian] periodically, because he lives in L.A. I probably see him the most. I don't have much communication with Charlie [Benante]. But I treasure my years in ANTHRAX. I think we made some great records. I'm real proud of them. It's just, time goes on, and life goes on. I believe that Joey should be in the band. I think he's right for being in ANTHRAX."

On possibly revisiting some of his ANTHRAX catalog in the future:

John: "The [booking] agent that I have has kind of pushed me to entertain that, and I finally said, 'Okay, maybe I'm into it.' It shouldn't be with the guys in the band — it should be with some other musicians. And it shouldn't be some long tour — it'd probably be a handful of dates here and there if it happens. There has to be an interest. There has to be a desire from promoters to want to do it. We'll see what happens."

On being asked to join METALLICA in the early 1980s:

John: "I think that at the time, James [Hetfield] was still uncertain whether he wanted to be the singer of the time. [It was] before 'Kill 'Em All'. He was unsure. They asked me, but at the time, ARMORED SAINT — Joey [Vera], Gonzo, Phil [Sandoval] and myself, we've known each other since we were eight years old. ARMORED SAINT was starting to do really well on the L.A. club circuit, and we were all friends — best of friends. METALLICA was doing well too, but I don't think anybody envisioned what was going to happen. For me to leave my band of friends to join some other band, it didn't make sense to me. I didn't want to do it. Certainly I was grateful and honored, but I always say, 'I was not meant to be in METALLICA. That was not my destiny.'"

Bush fronted ANTHRAX – with whom he recorded four studio albums of original material, as well as the live album "Music Of Mass Destruction" — from 1992 to 2005, and then again for several shows in late 2009 and early 2010.