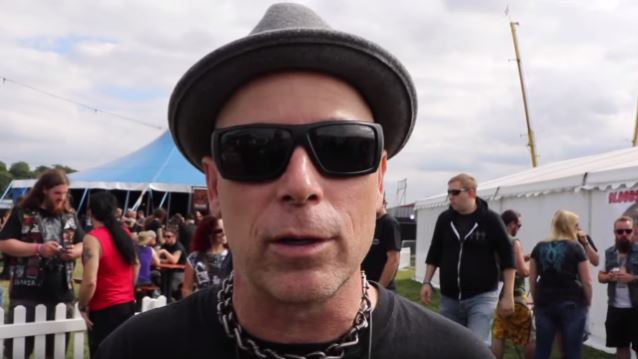 Former ANTHRAX and current ARMORED SAINT singer John Bush was interviewed on the latest installment of HATEBREED frontman Jamey Jasta's official podcast, "The Jasta Show". You can now listen to the chat using the SoundCloud widget below.

Bush fronted ANTHRAX between 1992 and 2005 but was sidelined when ANTHRAX reunited with Joey Belladonna for a 20th-anniversary tour. When that collapsed, and relationships disintegrated with next frontman Dan Nelson, Bush returned for a time before Belladonna took the job back in 2010.

Speaking about disagreements about money and finances that can often lead to strained relationships between bandmates, Bush, who recently released a new album with ARMORED SAINT, said: "I'm gonna go out on a limb right here and just tell you that my other band I was in [ANTHRAX], they've had a lot of — a lot — of accounting and management issues that were affecting me personally. [Former ANTHRAX guitarist] Dan Spitz has an issue with the band. And I don't know Dan at all… Well, I know him a little bit. But he feels like he hasn't paid by the band. And the dude made seven records with ANTHRAX. And the dude should be paid on those records that he made with the band. And I think he was getting burnt. And there were some accounting issues, and the accountant… There was beef with accountants."

He continued: "I probably shouldn't be saying this, but I'm saying it. It's, like, I'm out there signing ANTHRAX records I made. I just wanna be paid for the records [that were] made and sold. And it gives me pride in those records. And then when you don't [get paid for your contributions], you become very bitter about it, and it's not cool."

Bush added: "I'm super proud of all the music I made in ANTHRAX, I just wanna be paid for it, quite frankly… I don't even get statements, man. It was a pain in the butt. We're going through it right now. We're ironing it out. There's a new accounting company, and they seem to be on the up and up now."

According to Bush, ANTHRAX's many changes in management, record labels and accountants have resulted in him having to chase down the money that he is owed, leaving a bad taste in his mouth.

"I've been paid, I just… I haven't been paid consistently and not updated," he explained. "There was an issue again with the accountant that the band used to have for years and years, and then I guess there was a falling out there. Those things seem to happen a little more often with ANTHRAX than maybe the average band. But it's something that, again, you just wanna feel good about the music that you've made. And, you know, every day that I probably am out here [on the road] promoting [ARMORED SAINT's latest album] 'Win Hands Down', somebody might go buy an ANTHRAX record. So I'm continuously selling my old records with ANTHRAX by just doing this."

He continued: "It's all good. We'll work it out — I hope. It's been a little frustrating. And I'm sure it's been way more frustrating for Dan. Again, I don't know him that well, but he's had some problems. And Dan was on all those classic '80s albums. He was a founding member of the band."

Bush went on to say that there are no money disagreements in ARMORED SAINT, the band he co-founded with his childhood friends Joey Vera (bass),Gonzo Sandoval (drums) and Phil Sandoval (guitar).

"Luckily, ARMORED SAINT and Metal Blade [ARMORED SAINT's record label], we're pretty close and there's a lot of comfort in knowing that they're doing things right," he said. "Tracy Vera is the president [of Metal Blade], who is Joey's [Vera, ARMORED SAINT bassist] wife, so I think she probably… We probably benefit more than would not benefit in our situation. We purchase records and then we sell them on the road, and we make some money from that, and that's great. You're actually making money from your records, which, that wasn't the case back in the day — certainly not in the '80s. So there's a way to do it. You just have to be savvy."