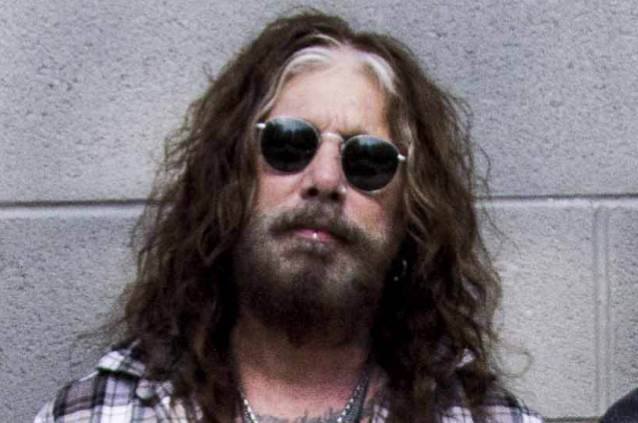 In a brand new interview with "Rock Talk With Lafon", former MÖTLEY CRÜE singer John Corabi spoke about the experience of working on the band's 1997 album "Generation Swine" before he was replaced by a returning Vince Neil.

"As enjoyable and amazing of an experience the first record was [referring to 1994's self-titled album], that's how much it was the complete polar opposite with what became 'Generation Swine'," he said (hear audio below).

"You have to understand, my record ['Mötley Crüe'] was the first record that they had done — now, it went gold — but my record was the first record that they had done that didn't go platinum, didn't make some sort of crazy noise, and everybody panicked. And I think at that point, the band fired [their manager] Doug Thaler, they fired their accountants, they fired their lawyers — they fired everybody. And at that point, we were gonna start the next record. And instead of going back to [producer] Bob Rock, which I thought we should have done, I don't know why, but Tommy [Lee, drums] and Nikki [Sixx, bass] thought that they would be able to produce the next record themselves, which I think was a massive, massive mistake.

"The first record was obviously a [commercial] disaster — we know this; it's common knowledge — so your next record, I think, it's, like, this now is the most important record you're probably ever going to do, and they sat and they decided to [produce] it themselves," he continued. "And I just never understood that concept. And then to boot, I love ['Generation Swine' co-producer] Scott Humphrey to death — he's a great guy and he's incredibly talented — but, honestly, he sat in between Tommy and Nikki, and he was the guy that was trying to filter all of their ideas and move forward with them, and he had no control over any of them, where Bob Rock, when we worked with Bob, if Nikki was trying to maybe add a part, or Tommy was trying to add something, Bob Rock could come into the room and go, 'No. The song is done. That's it. We're putting it to bed. Forget about it. Let's move on.' They respected Bob Rock. And there was a bit of an intimidation factor there with Bob Rock, which Scott didn't have. So there was no brakes on that thing at all — at all. And I just remember… I was just miserable.'

Corabi went on to say: "Nobody has truly understood what I was talking about, but there was a point where I loved being in that band, but at that point, that year or a year and a half prior to them bringing Vince back — 'cause we worked on 'Generation Swine' for, like, two years, two and a half years before Vince even came back… And I was sitting there trying to process everything… And not to be weird, but I could have burped on tape for the first record and they would have been, like, 'Oh my God, dude! That's the greatest burp I've ever heard in my life. That's amazing!' And this record, I would sing something, and it was, like, 'Ehh… It's a little too bluesy.' Well, newsflash: I'm a bluesy singer. You knew this. So then I'd have Nikki on one side interjecting, 'Well, Crab, I love what you're doing, but it's not really what I'm hearing in my head.' And this is what a producer does. 'It's not what I'm hearing in my head. I'm hearing something…' And then he would give me, like, 'MANIC STREET PREACHERS, SISTERS OF MERCY meets David Bowie.' And then Tommy would go, 'Yeah, but heavy, dude, like PANTERA, but lush and melodic like OASIS.' And then Scott would go, 'Or CHEAP TRICK.' And I'm sitting there and I'm going… I had no concept of what they were talking about. How do you go from MANIC STREET PREACHERS, SISTERS OF MERCY and Bowie to CHEAP TRICK and OASIS, with PANTERA thrown in. Like, 'I don't understand what you're saying.' Where Bob Rock, he would be way more pinpoint exact — like, 'Here's what I'm talking about.' And if I still didn't understand it, he would sing it to me. 'Oh, okay. Totally understand what you mean.' Yes — boom! And I would go in and do what I had to do. So I was kind of struggling."

John added: "So by the time they came to me and said, 'We're bringing Vince back,' honestly, I was losing my hair, I was a nervous wreck — my stomach was just in a knot constantly. Because I felt like, 'I don't what happened here, but I'm not giving them what they want. I don't understand this. I'm perplexed.' So I was driving myself crazy. They were driving me crazy. So when they told me that Vince was coming back, I was devastated but relieved at the same time. I was totally, totally relieved, but devastated at the same time."

Corabi originally joined CRÜE in 1992 as the replacement for Neil, who was fired due to personal differences.

John, who has been recording and touring with the supergroup THE DEAD DAISIES for the last few years, was only credited for two songs on the original pressing of "Generation Swine" even though he claims he contributed to at least 80 percent of the material on the LP.

In July 1997, Corabi filed a $4-million lawsuit against MÖTLEY CRÜE for alleged breach of contract, fraud, and slander. Corabi claimed that he had not received royalties or credit for his work and contributions while he was in the band.

A live album of Corabi's performance of MÖTLEY CRÜE's entire 1994 self-titled album, recorded on October 27, 2015 in Nashville, Tennessee, was released in February via Rat Pak Records. "Live '94: One Night In Nashville" documents the album in its entirety along with the bonus track "10,000 Miles" which was originally released as a bonus track on the Japanese version of the "Quaternary" EP.

In 2015, Corabi contributed lead vocals to two songs from MÖTLEY CRÜE guitarist Mick Mars, apparently called "Gimme Blood" and "Shake The Cage", which were recorded at Blackbird Studio in Nashville, Tennessee. The tracks have yet to be released, although snippets of both cuts have surfaced online.