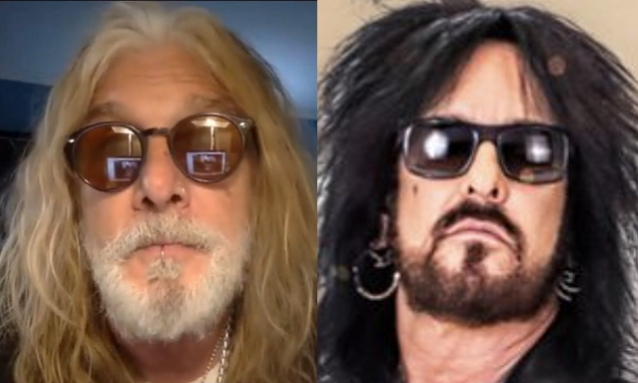 Ex-MÖTLEY CRÜE singer John Corabi says that he would have to "bury the hatchet" with Nikki Sixx before he would ever consider doing anything with the band again.

Corabi joined CRÜE in 1992 as the replacement for the group's original singer, Vince Neil, who was dismissed due to personal differences. With Corabi on vocals, MÖTLEY CRÜE released one critically acclaimed full-length CD, which ended up being a commercial failure in the wake of grunge despite a Top 10 placing on the album chart. When Neil returned to the fold in 1997, Corabi was left on his own.

John reflected on his time with CRÜE during an appearance yesterday (Thursday, August 18) on SiriusXM's "Trunk Nation With Eddie Trunk". Asked if he thinks there is a possibility that he would ever get a call from MÖTLEY CRÜE again if the group had an issue with Neil, John replied (as transcribed by BLABBERMOUTH.NET): "No. I can absolutely, certifiably tell you there is zero chance of that ever happening. Until Nikki and I would be able to sit down at a table and have a cup of coffee and chew the fat and just whatever, it's never gonna happen.

"Initially, I was, like, 'Whatever. It doesn't matter. I'm done reaching out to those guys,'" Corabi continued. "Tommy [Lee, CRÜE drummer] reached out to me. Now we've got a communication again. Mick [Mars, CRÜE guitarist] I've been fine with. Even Vince I'm fine with. But for some reason Nikki started this whole thing about me not contributing to the '94 record, that it was painful, and I was just, like, 'Whatever.' But it's just this nagging thing that keeps going. And even we did a show at this thing called Loud Park in Tokyo when I was with THE [DEAD] DAISIES and Nikki sat on the side of the stage and he just made some comments and he was just commenting negatively about the band. And I'm, like, 'Dude, what is your problem?'"

Corabi added: "But I don't care. You know what? If that's what makes him happy, have fun with it. It doesn't matter to me. But now it's at a point where the only way that I would ever even remotely think about doing anything with MÖTLEY is if Nikki called me and said, 'I'm sorry. I wanna bury the hatchet.' And I'd be, like, 'Well, I'm sorry too for anything that I said if it offended you.' But until that happens, there's no chance. It'll never happen."

Six years ago, Sixx told Sweden Rock Magazine about MÖTLEY CRÜE's self-titled album: "I think it was a very unfocused record. It was painful for me, because John Corabi can't write lyrics, and I had to do all that work.

"It was the first time I ever had to work with somebody that wanted to participate in the lyrics," the MÖTLEY CRÜE bassist continued. "And my standard is so high that it was so hard, it took months. Usually, I write a set of lyrics in an hour.

When he was asked in an interview with Thomas S. Orwat, Jr. of Rock Interview Series why Nikki would make those comments more than two decades after the CRÜE LP was released, Corabi said: "I've had a few people ask me, 'What's the beef with you and Nikki?' And I go, 'I have no fucking idea.' I don't know. The one beef that I did have with Nikki was probably 10 years ago, and it was something in relation to his…

"I had done an interview. And I was in Brazil. And the interviewer asked me a question, and they said, 'Have you read Nikki's book 'The Heroin Diaries'?'" he continued, referencing Sixx's 2007 book which was supposedly taken from actual journals Sixx kept in the late '80s while in the grip of a near-fatal heroin addiction. "And I said, 'Yeah. I own the book. I bought the book.' And he said, 'What do you think?' And I said, 'It's a great read.' Now the guy, I don't know if he was doing this to bait me or what, but the guy said, 'Well, do you believe it all?' And I said, 'Whatever, dude. It doesn't matter. It's a great read.' And he goes, 'Well, do you think it was colored?' And I said, 'Of course. Of course it was.' 'Well, why do you say that?' 'Well, 'cause [the CRÜE official band biography] 'The Dirt' was colored. I know for a fact 'The Dirt' was colored.' … And then I said, 'And besides, all of the heroin addicts that I knew didn't have the foresight to bring a diary with them and write shit down as it was happening or could not remember what they did the night before.' Now I followed it up with, 'Maybe Nikki's different, but the ones that I knew… So I think it was a little… It may have been a little colored.' And we left it at that. Then, two months later, Nikki e-mailed me and he was pissed. He's, like, 'Dude, I don't appreciate you slagging my book.' And I go, 'I didn't slag it.' So I responded to him, and I said, 'Okay. First of all, a couple of things. Did you read the whole interview? 'Cause in the interview I did say, at the beginning and at the end, that it was a great read and I bought the book.' And then I said, 'Why do you give a fuck about anything I have to say?' And I just hit 'send.' And then he came back and he was, like, ' Oh, okay, dude. Sorry. I didn't read the whole… Okay. Great. Awesome.' And it was cool. It was put to bed.

"I've never said anything negative about that band ever," Corabi added. "But then all of a sudden he started with, 'Corabi can't write.' 'It was painful.' 'He doesn't have any fire.' And I'm just, like, going, 'Where the fuck did that come from?' It was just random. Now it's weird. If I retort to it, [the music news web sites] take every little piece of retort and they dissect it and then they reprint just the parts that — you know, the clickbait — and it's just been this ongoing thing, like I'm saying Nikki doesn't like it, and it's back-and-forth volleying between me and Nikki when in all actuality I have zero bad things to say about any of them. They're irrelevant to me — completely irrelevant."

Corabi recently released his autobiography. Titled "Horseshoes And Hand Grenades", it was written with the help of MÖTLEY CRÜE historian/author Paul Miles, and was made available via Rare Bird Books.