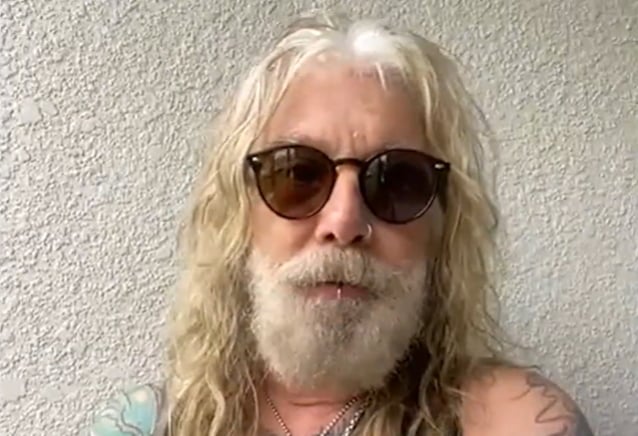 Former MÖTLEY CRÜE frontman John Corabi, who joined the band in 1992 as the replacement for original singer Vince Neil, has shot down the perception that he was financially set for life following his departure from the group. "That's one of the things everybody assumes, because I did the MÖTLEY thing, that I was a multimillionaire," John told Logical Logistics in a new interview (as transcribed by BLABBERMOUTH.NET). "And it was funny — I made money when I first joined MÖTLEY; I got bonuses and publishing and all these advances and stuff. But at the same time, I joined MÖTLEY in 1992 and I left the band in '97, and in that five years my son was diagnosed with diabetes, my mom had been diagnosed with cancer. So fortunately/unfortunately, I wound up taking care of them financially. And then there's the normal shit — you've gotta pay your taxes. I remember, fuck, there was two tax checks that I wrote. My first one was $139,000 and then the following year I had to spend $219,000 in taxes. Like, wow. So by the time the five years had passed, I lived off that money and beyond, but it was starting to get dangerously low. The music industry was changing; a lot of the '80s bands weren't selling any records. So it was a weird time."

Corabi also talked about his brief stint driving a truck for a living a few years after his exit from the CRÜE and during his tenure as the rhythm guitarist for RATT.

"The whole reason why I did it… I mean, I wasn't in dire straits financially," he explained. "RATT was taking a year off. At that point, I think I was paying child support and alimony — I was paying $2,500 a month — but I was going through a second divorce, and it was this push-and-pull thing where the girl would come back, and she would disappear, then she would come back. And I'm, like, oh my God. I just needed and wanted a little bit of a change. So I was, like, 'All right. I can get a trucking license in three weeks. And I'm gonna learn how to do this.'

"I was telling a friend of mine not that long ago. I said you know what's weird. I spent most of my life traveling in a tour bus, but you're usually traveling at night, and you see shit in a tour bus," John continued. "And I could not believe some of the places that I saw driving that truck and just moving goods around the United States. I'm, like, wow. There's parts of the United States... I've been literally touring my whole life and there was things that I'd never seen before until I started driving a truck. And I had a fucking blast. I did it for almost a year. And then RATT called and said, 'Hey, we're getting ready to go back out on tour again.' And I called my boss and I just said, 'Hey, man. I'm going back to touring.' And it was funny. 'Cause a lot of people didn't know who I was, or they didn't know anything about my history. When I told my boss, I said, 'Hey, I'm gonna go back to touring again,' he was, like, 'What are you talking about?' And I said, 'Well, I'm actually a musician.' And I told him who I was and all that stuff. And I just handed him the keys back and I said, 'I thank you. I had a great time. It's been awesome. I'm going back on tour again.' So I did it for almost a year. It was cool. Mentally, it cleared my head, 'cause I was just driving and thinking and mapping things out in my head. And then I made a really decent living, and I had health insurance for me and my son. It was cool, man. I had a great time. It was awesome."

With Corabi on vocals, MÖTLEY CRÜE released one critically acclaimed full-length CD, which ended up being a commercial failure in the wake of grunge despite a Top 10 placing on the album chart. When Neil returned to the fold in 1997, Corabi was left on his own and formed UNION with Bruce Kulick.