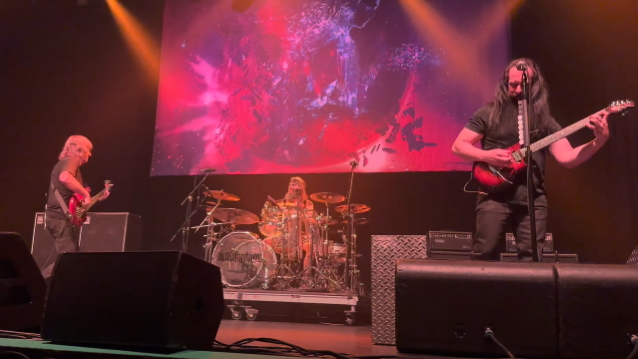 DREAM THEATER guitarist John Petrucci played the tenth show of his first headlining solo tour on October 17 at The National in Richmond, Virginia. Petrucci performed material from his recently released solo album, "Terminal Velocity", as well as songs from his widely acclaimed debut release, "Suspended Animation". "Terminal Velocity" marked the first time that John and former DREAM THEATER drummer Mike Portnoy recorded together since Mike left the band in 2010. Now, John is taking his instrumental trio on the road performing live with Portnoy and legendary bassist Dave LaRue in an onstage reunion that has been 12 years in the making.

The setlist for the Richmond concert was as follows:

Fan-filmed video can be seen below.

Asked in a new interview with Rob Rush Radio if there were any "first-show jitters" prior to the first concert of the tour, which took place on October 5 in Providence, Petrucci said: "There's always that. First of all, playing with Mike again is so awesome, and, of course, with Dave LaRue, my trio, is just great. [October 5] was the first night of the tour and the first time Mike and I stepped onstage and performed together in 12 years. So it was a really special moment. I've known him — we met at Berklee [College Of Music]; we were 18 years old; we played together forever, even though he's not in DREAM THEATER anymore. So there is just this chemistry and camaraderie that's just so natural. We had such a great time. But, yeah, first song you get a little jittery and then it kind of disappears. It was a lot of fun."

The historic tour will run through October and November and promises to be an unforgettable night of live musicianship. The recently reunited all-female band MEANSTREAK is the special guest openers for the tour. MEANSTREAK is comprised of guitarists Marlene Portnoy (Mike's wife) and Rena Sands (Petrucci's wife),vocalist Bettina France, bassist Martens Myung (wife of DREAM THEATER bassist John Myung) and drummer Yael.

Portnoy, who co-founded DREAM THEATER more than 35 years ago, abruptly quit the band in September 2010 while on tour with AVENGED SEVENFOLD. He has since been replaced by Mike Mangini (ANNIHILATOR, EXTREME, JAMES LABRIE, STEVE VAI).

Petrucci previously said that having Mike play drums on "Terminal Velocity" was a "really special" experience for him. "And he did an absolutely incredible job navigating the various styles and technical challenges my music presented in the way that only he can do," John said.

"It was very cathartic for the both of us, I think, to be playing music together again after all these years, and it really felt great. Mike's spirited, intuitive and energetic playing truly helped to elevate these new songs to a level that I couldn't be happier with."

An additional date in Sherbrooke, QC on Nov 18 has been added to the JP solo tour with Mike Portnoy, Dave LaRue and special guests Meanstreak!