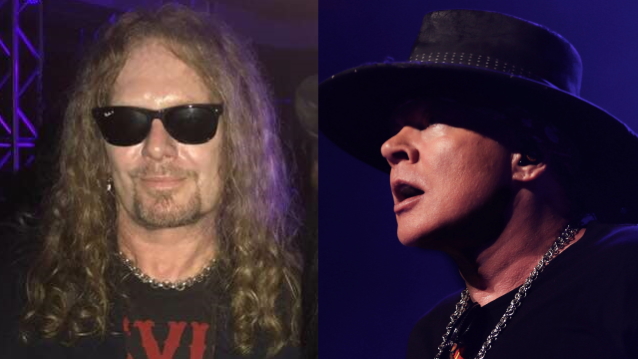 GUNS N' ROSES' Richard Fortus has confirmed that the legendary John Sykes (THIN LIZZY, WHITESNAKE) auditioned for the then-vacant guitarist slot in GN'R more than a decade ago. "That was when D.J. [Ashba] came in [back in 2009]," Fortus told Tone-Talk in a new interview (see video below). "We auditioned a bunch of people, and John Sykes was incredible.

"I remember Tommy Stinson [then-GUNS N' ROSES bassist] came in, and we walked into rehearsals, and we see John there," Richard recalled. "Tommy turns around to the tour manager, and he goes, 'Man, send him home. Why are we doing this? Axl's [Rose, GN'R singer] not gonna go for this.' And [the tour manager] is, like, 'It's John Sykes, man. He learned the songs. The least you can do is listen to him.' So Tommy was, like, 'All right. Fine.' So we go in the room, and within two minutes, Tommy is looking over at me, like, 'Oh my God!' I mean, it was incredible — incredible. And he just plugged straight into the amp, and just killed it. His tone was incredible. Our jaws were on the ground, for sure."

On January 1, Sykes released the official music video for a new song called "Dawning Of A Brand New Day". The track, which was recorded at least four years ago, is expected to appear on Sykes's long-awaited new solo album, "Sy-Ops", tentatively due later this year.