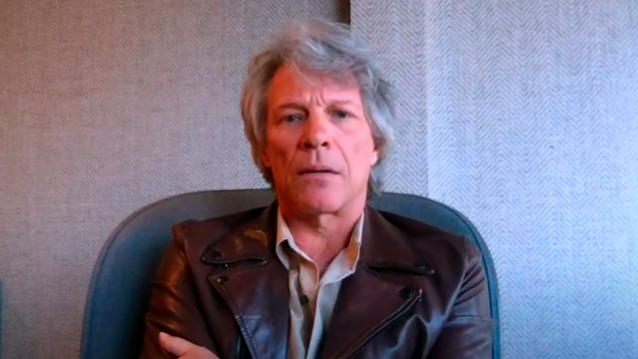 Jon Bon Jovi canceled his appearance at a Miami Beach concert Saturday night (October 30) after testing positive for COVID-19, the disease caused by the novel coronavirus.

The 58-year-old BON JOVI frontman, who is said to be fully vaccinated, pulled out of the fan event minutes before he was supposed to take the stage for an acoustic Halloween performance at the Loews South Beach.

According to the Asbury Park Press, Jon's brother Matt Bongiovi took the stage and told the audience the singer had tested positive for the virus after Jon and his backing band had all taken a rapid test. Bongiovi added that Jon "feels great" but was headed "to bed," according to WSVN.

Jon's positive COVID-19 test was confirmed by a BON JOVI representative, who added that he is "fully vaccinated and feeling fine."

A video posted on Twitter shows Bon Jovi leaving the venue. He reportedly then got into a yellow Maserati driven by his brother.

The event, dubbed "Runaway With JBJ" and put on by Runaway Tours, was scheduled to include an acoustic storyteller performance, question-and-answer session and photo-op with Jon, in addition to a Halloween costume welcome party.

Jon's publicist told DailyMail.com: 'This was a Runaway concert which means it is a smaller more intimate type acoustic show for the top levels of his fan club, so he is backed by on these by a group of musicians called the KINGS OF SUBURBIA, not by 'BON JOVI' — and out of an abundance of caution they did not perform without Jon."