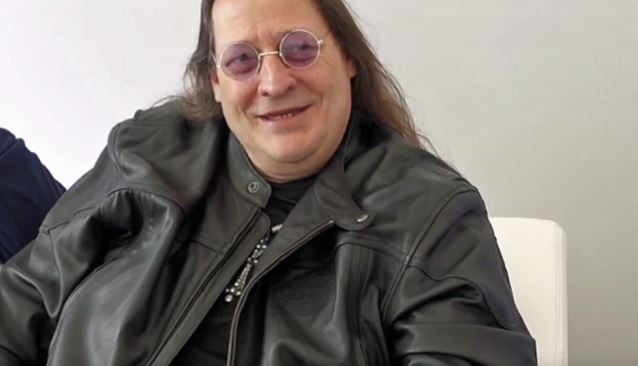 Jon Oliva, the American composer, multi-instrumentalist and singer who is best known as the founder of and keyboardist and lead vocalist for SAVATAGE, has revealed that he suffered a stroke back in April. He writes on his Facebook page: "It was not as serious as it could have been, but it did leave me with some physical recovery challenges often associated with strokes. Physical therapy and rehab sessions are getting me back to normal, and I am once again feeling confident about recording new music. Needless to say, such a traumatic health issue was a real epiphany for me....oh yeah!"

Despite his latest health issues, Jon says that he doesn't regret the way he has lived his life. He writes: "I lived the rock 'n' roll lifestyle since I was 18. It's all I knew and I enjoyed the ride very much. But there comes a time in everyone's life where you have to step back and make some life-changing decisions...which I have! So with a fresh and energized approach to my life, I can now focus on the release of a double-album of new Oliva music to be recorded and released very soon."

Oliva says that he has been putting together a collection of songs for the past year which he is "very proud of." He writes: "I think all SAVATAGE / JON OLIVA'S PAIN / TRANS-SIBERIAN ORCHESTRA and DR. BUTCHER fans will really enjoy it. I believe it will be my finest effort yet and will feature all the different flavors of my musical influences and history. I promise not to let you down!"

Jon concludes by thanking his fans "from the bottom of my heart for your love and support over these many years together. Your desire for my music helps to fuel my soul and my love to create that music."

Shortly after SAVATAGE's reunion performance at last year's Wacken Open Air festival in Wacken, Germany, Oliva revealed that felt better than he had in twenty years because he had "stopped drinking and eating" in preparation for the concert. He explained: "It's my voice that's freaking me out, because, even when I was in my late 20s, early 30s, doing songs like '24 Hours Ago' were always really hard to do. And, of course, I didn't realize that it was all the drugs and alcohol I was doing. But, after doing that, getting my act together and stuff, singing '24 Hours Ago', it's actually easy now. [Laughs]"