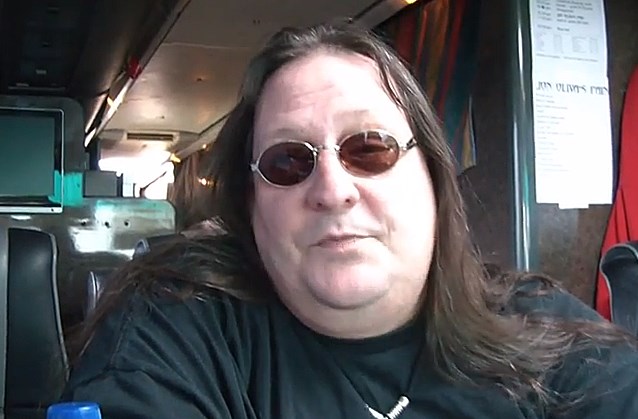 Greg Prato of Songfacts recently conducted an interview with Jon Oliva (SAVATAGE, TRANS-SIBERIAN ORCHESTRA, JON OLIVA'S PAIN). A couple of excerpts from the chat follow below.

Songfacts: Would you agree that SAVATAGE was one of the first-ever true prog metal bands?

Jon: Absolutely. No doubt about it. I think that really started with "Hall Of The Mountain King", but then definitely from "Gutter Ballet" on, we definitely expanded. We had done three or four records that were basically the same, except for "Fight For The Rock", which we don't count. That's like the red-headed stepchild. But yeah, we started going that route, definitely with "Gutter" and "Streets". I had never heard of the term prog rock until a few years ago. I didn't know what it was. Back in 1987 I don't remember that term being around. Was it?

Songfacts: The only other band that may have been described that way is maybe QUEENSRŸCHE, but I really don't remember them being described like that around the time that also SAVATAGE was around, back in '87.

Jon: Yeah, it's weird. I'm wondering when that prog base first started popping up as a new genre. I've got to check that out. That's going to bother me all day now. I want to know when the first time someone said "prog rock."

Songfacts: I think DREAM THEATER may have been the first band to be called prog metal.

Jon: If you really think about it, the first prog-type band was probably ELP. But I see what you're saying. DREAM THEATER to me, I like that band a lot. I think the drummer is amazing, just too many solos for me. I can't help it, man. They're great players. You can't take away the talent. These guys are unbelievably talented. Some of those solo sections are just like, "Okaaaay," but great band. People like 'em, so people like 20-minute guitar solos.

Songfacts: Why do you think that TRANS-SIBERIAN ORCHESTRA has reached such a huge audience, but SAVATAGE in the '80s didn't? Do you think it was just a matter of timing or just listeners' tastes at the time?

Jon: Well, I think what happened with that mainly is that the name SAVATAGE, we ran the course with it. And because of some bad mistakes that we made business-wise in our younger days before Paul O'Neill, we never could quite recover from that and get into the bigger level. I mean, we did well. We did really good in Europe. But we never got SAVATAGE to that level, and after 20-some odd years and then losing Criss [Oliva, guitar] in the middle of that, we just weren't ready to continue. The fatal thing that happened was with the song "12/24" off of the "Dead Winter Dead" album [1995]. We sent the song out around Christmastime, and a station down in Florida started playing it, and it became a hit down here. Atlantic Records sent that CD to every radio station in America and nobody would play it. They said, "Why didn't you play the song?" It's like, "Well, SAVATAGE, that's a heavy metal band from the '80s. We don't play that shit." They never even listened to it. You know how we know? Because the next year we sent the exact same song and put a Christmas tree on the cover and an angel and called it "TRANS-SIBERIAN ORCHESTRA," and it was #1 on 500 radio stations. So that just goes to show you that what was holding SAVATAGE back was SAVATAGE. It wasn't the songwriting. It was the same, Paul and I, and before that, Criss, Paul, and I. You know, the proof was in the pudding. "12/24", which is technically a SAVATAGE song from the album "Dead Winter Dead", has sold millions of records. I've got them hanging on my wall. But when it was released as SAVATAGE, it sold 30,000. So what does that tell you? It tells you that the name's turning people off for some reason, and that's what it was. Now look at what's happened. TSO is one of the biggest bands in the world, it's unbelievable. It's funny to me, because it's SAVATAGE. [laughs] I get a kick out of this. I'm like, "It's SAVATAGE with tuxedos and a bunch of other people from all around the world." We bring in people from all around the world, which makes us kind of international, which I think is cool. But the thing that sells it is the music, Paul's stories, and Paul's poetry and the lyrics, and the way that Paul and I work together when we write. There's a chemistry there.