JON SCHAFFER's Attorneys Say He Was 'Not Violent' At U.S. Capitol, Claim He Left Building After Only 60 Seconds

The attorneys for ICED EARTH guitarist Jon Schaffer have requested a review of their client's detention order as he awaits trial in Washington in connection with the siege on the U.S. Capitol.

On Friday (March 19),U.S. Magistrate Judge Zia Faruqui ordered the 53-year-old musician, who resides in in Edinburgh, Indiana, held without bail on six federal criminal charges related to his alleged involvement with the insurrection at the U.S. Capitol. He ruled that while Schaffer wasn't a flight risk, he does pose a danger to the community.

Schaffer, who is being held in a Washington D.C. jail, appeared before Faruqui via teleconference.

A short time after the hearing, Schaffer's attorney Marc Victor filed a "motion to amend detention order," claiming that "the government failed to establish Mr. Schaffer's dangerous to the community by clear and convincing evidence."

During yesterday's hearing, government lawyers presented exhibits consisting of a video interview Schaffer gave in November 2020 at a pro-Donald Trump rally expressing his political views and a video and still photos taken on January 6, showing him inside the U.S. Capitol holding "bear spray."

According to WUSA9, the judge cited Schaffer's comments in the video interview that "if somebody wants to bring violence, I think there's a lot of us here that are ready for it."

Schaffer's attorney argued his client's comments were taken out of context, and that he knows he used bad judgment on January 6 and wishes he had a "do-over." He pointed out that the guitarist has no prior record and insisted that he isn't a danger to the community. He also argued the musician was not responsible for the insurrection and was encouraged by former president Donald Trump.

"People have the right to believe the highest elected official," Victor said, according to Indiana Public Media. "My client is not responsible for what happened on January 6."

Schaffer's attorney admitted Schaffer "used bad judgment that day" by bringing "bear spray" into the Capitol, but insisted he was only intending to use it for protection.

Court documents show Schaffer was originally scheduled to appear before the court on Thursday, but was unable to due to processing at a D.C. jail. 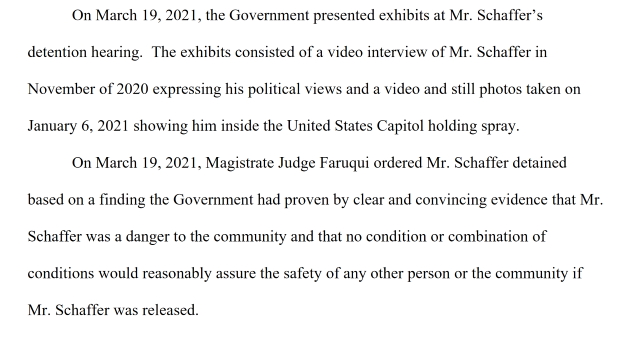 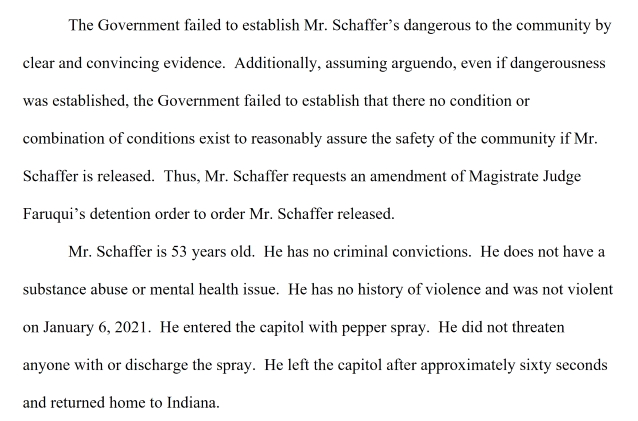