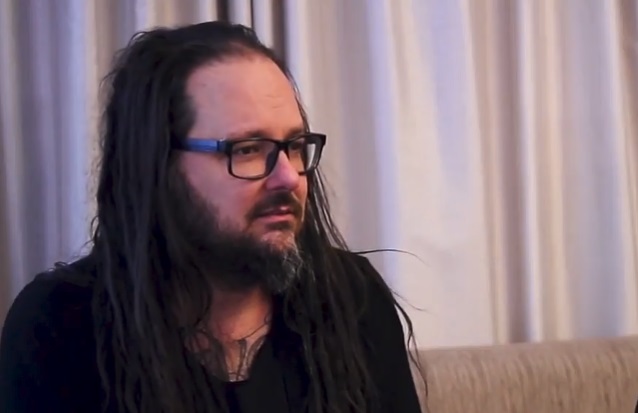 JONATHAN DAVIS On KORN's 1994 Debut Album: 'I Had No Idea So Many People Felt The Way I Felt'

Carlota of Kilpop recently conducted an interview with KORN frontman Jonathan Davis about his as-yet-untitled solo album. You can watch the entire chat below. A few excerpts follow (transcribed by BLABBERMOUTH.NET).

On the process of writing his first solo album:

Jonathan: "Well, it started off when I first did this tour called 'Alone I Play', which I did where I performed songs for [2002 movie] 'Queen Of The Damned'. I just wanted to go out and do it. I put this band together and I only had four songs in 'Queen Of The Damned', so we did old KORN songs that KORN doesn't play, really. It's all these rarities and we did this tour and I got this idea 'I want to do a real record, inspired by what I did with 'Queen Of The Damned' and stuff like that.' I started it, I got signed to this major label, unfortunately the person who signed me left. The guy who wanted to produce the record became the president, so I thought 'Cool.' But, he got too busy, he couldn't produce it, so it sort of got lost in the chaos over there. So, they gave me my record back. I was like, 'Okay, cool. I can walk away.' I walk away, and I go, 'Let's first get a label to put this out.' They go, 'Well, you need to go on the road with KORN.' They wanted to keep the KORN machine going. I understand, that's cool. Here we go, fast-forward ten years later and finally KORN is taking a break because we had this successful record for the last touring cycle. Now the guys are writing some stuff and it gives me a chance to do this because I really wanted to do it and never had the chance. The rest of my bandmates have been able to put out solo projects and I was never able to. I wanted to do this finally now. I got it and now here it is and I'm getting ready to go on this tour here in Europe. I'm really happy with the record. It's been a long time. Most of it was recorded and done ten years ago, but some of it I wrote on the road and I just finished doing some vocals on some stuff a couple of weeks ago. It's been a long process, but it turned out great. I'm so happy with it."

On whether he was surprised by the positive reaction he's received about his solo venture:

Jonathan: "Yeah, of course. I hope people dig it. The same with KORN, I had no clue. When the first KORN record came out [in 1994], I had no idea so many people felt the way I felt. It was overwhelming. This was the same thing when I put the song out there. Like, there's a lot of people that brings out, what it is the song brings out a lot of emotion. I'm very happy that it's touching them in a good way."

On how his KORN bandmates reacted toward hearing his debut single, "What It Is", the first time:

Jonathan: "They've always been very supportive of me. They've heard them here and there because I always bump them in my dressing room. I make so much music that it's in my own personal collection that I just listen to. I don't know…I'm selfish like that. I've got tons and tons of songs. Whether in my dressing room or playing video games, I'll be bumping stuff, so they've heard stuff over the years and they've been very, very supportive. Like, 'We're proud of you. Do your thing.' They get it. They've all done their own solo things, too and I always support their stuff. It's very fortunate that a group of guys like us can get along for this long and not hate each other and like to be around each other. I've heard horror stories about other bands. We're not one of those. We're a family."

Davis's solo album is tentatively due this spring via Sumerian. The effort is expected to include "What It Is", which was released in January. Davis will embark on a solo tour in early April. The trek, which will run through the end of June, will include a number of European festival appearances.