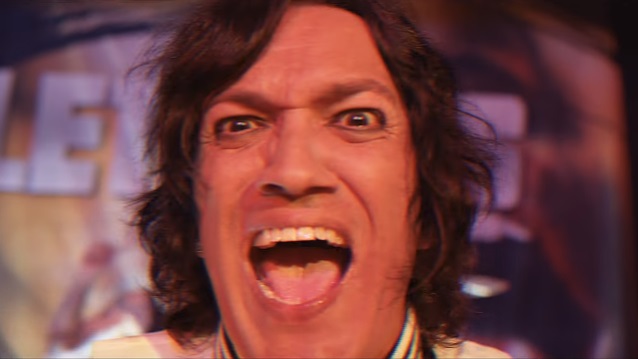 Allie Jorgen of L.A. Metal Media conducted an interview with BULLETBOYS frontman Marq Torien prior to their February 23 concert at Whisky A Go Go in Los Angeles, California. You can watch the entire chat below. A few excerpts follow (transcribed by BLABBERMOUTH.NET).

On the recording process for their forthcoming "From Out Of The Skies" studio album:

Marq: "We recorded 'From Out Of The Skies', we were very privileged to go into this magical place called 606 Studios, which is the studio where the FOO FIGHTERS have cut all of their records. David Grohl, I have, just huge admiration and love [for], he stepped up for our band and allowed us to come into this beautiful studio to record this record with our producers Luke Tierny and Rick Parker and the band and we were completely blown away. I mean, I know some of the cats in the band and how it actually started, I'll just be real honest with you: guys from my genre of music don't ever get to be in that type of studio. It actually started off with, I wanted to do it at this other friend of mine's studio and I won't mention his name, but it didn't work out. [FOO FIGHTERS drummer] Taylor Hawkins had invited me to come and sing for [now-deceased L.A. radio personality] Bob Coburn and we were doing a benefit for Bob Coburn. He has a band called CHEVY METAL. It's a bad-ass band. He texts me and goes, 'Hey, Marq, can you come up and do a couple of songs?' 'Yeah, yeah!' So, I showed up and everyone is there: Steve Jones [SEX PISTOLS], Dee Snider [TWISTED SISTER] and all of these people, I just love them so much. We walked back there and we talked to [FOO FIGHTERS guitarist] Chris Shiflett. I go, 'Shifty, we're going to do this and blah, blah, blah. I don't know where to go.' He's, like, 'You need to come to 606.' Then he calls Taylor: 'Marq has got a new record. Yeah, come into the studio. Get Lou and make sure David hears the record.' That's how it all happened. David heard it and he said, 'You know, you're taking big risks on this record and I applaud that.' I said, 'I really want to thank you for the music that you wrote because I've gone through some really trying times and emotional times personally and your music saved my ass.' And he says, 'Do you know what, Marq? Do you know why I wrote that? For the exact reason you just said.' For him to come in right as I'm walking out into the parking lot and he comes in and we're just, he goes, 'I know you!' I go, 'I know you but I don't know you!' He goes, 'Yeah, you do!' He was just so sweet and such an amazing human. Listen, I'm not trying to stroke people, I'm just saying it from my heart that we're very grateful and very humbled that we got to record that record."

On the writing process for "From Out Of The Skies":

Marq: "I actually wanted to take what we did on [2015 album] 'Elefanté' and take it to even, maybe, not the same thing, but in the same genre of what we were doing. This record's punk rock, funk, R&B, rock and roll and metal, all kind of just thrown into a blender and put through there with some pop influences also. I really put it out there, really lyrically about some of the things that I've gone through in bad ways and in good ways. I've never really been able to do that. That's the one thing that's very scary when you're honest with your lyrics and you really let it all out there and are really honest. I hear artists always talk about it. I was, like, 'What are they talking about?' When you actually do it, you're like, 'Wait a minute…they're right. This isn't that easy to be so honest.' But, I really think we accomplished that with this new album."

On the guest appearance from EAGLES OF DEATH METAL frontman Jesse Hughes on new song "D-Evil":

Marq: "As anybody knows from the [interviews] that I've done, I love the EAGLES OF DEATH METAL. I love everybody in the band and I've loved their music since they first started. Jesse Hughes has been a hero to me. I don't think there's ever been a man that's gone through the horrific situation that he and the band went through in Paris [referring to the 2015 Bataclan terrorist attack], not to get too wordy about it. He's like me. There's certain guys that live, eat and breathe rock and roll and they love music and that's what they do. Jesse's that type of magical person."

"From Out Of The Skies" will be released on March 23 via Frontiers Music Srl.