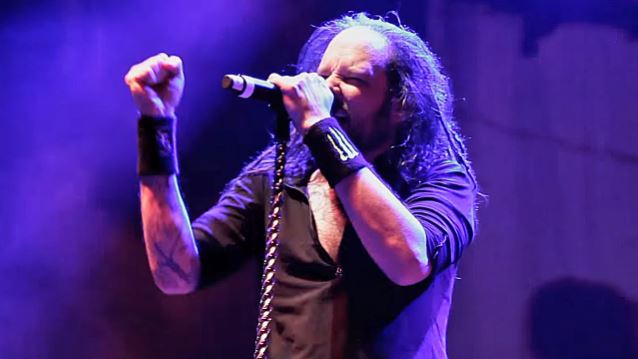 Jonathan Davis has admitted that he thought SEPULTURA's 1996 album "Roots" was a "blatant KORN rip-off."

Asked if he's proud of the bands KORN has inspired over its 23-year career, the singer told Metal Hammer: "Yeah. SLIPKNOT were inspired by what we did, but they took it and did their own thing, which is fucking amazing.

"One that I thought was a big compliment, but I also thought was fucked up, was SEPULTURA's 'Roots' album. That was just a blatant KORN rip-off, and I had it out with producer Ross Robinson about that, because he just took our sound and gave it to SEPULTURA.

"My young brain couldn't handle it. But they were one of our biggest influences, so I guess they get a pass. And that's a classic album, so it's all good."

Asked in a December 2013 interview with DeadRhetoric.com if he was a proponent of the down-tuned guitar approach, like former SEPULTURA frontman Max Cavalera was, around the time when bands like KORN and the DEFTONES were just beginning to take off in terms of popularity, SEPULTURA guitarist Andreas Kisser said: "At the beginning, not much. I was skeptical of the low tuning because bands like KORN or the DEFTONES, they don't have the fast pace of SEPULTURA's music. I was concerned to lose that kind of fast ability and the picking, the heavy picking on sloppy, low strings. But there are so many possibilities of using heavier-gauge strings, which give that kind of tension, and you don't lose that ability to play fast. 'Trauma Of War', the song that opens the [last SEPULTURA] album ['The Mediator Between Head And Hands Must Be The Heart'], it's in low tuning, but it's a very fast song, but we don't lose that kind of ability. I learned how to do deal with that, and you open a lot of worlds in music, but yeah, at the beginning I was a little skeptical."

During an interview with ARTISTdirect, Max recalled working with Davis on the "Lookaway" sessions. He said: "Mike Patton was on the song, and Jonathan's a huge FAITH NO MORE fan. He was actually freaking out that Patton was there. He was really nervous, which was actually kind of funny. He kept chewing on his hair the whole time he was in the studio. Ross Robinson teased him at one point and told him to calm down. [Laughs]"