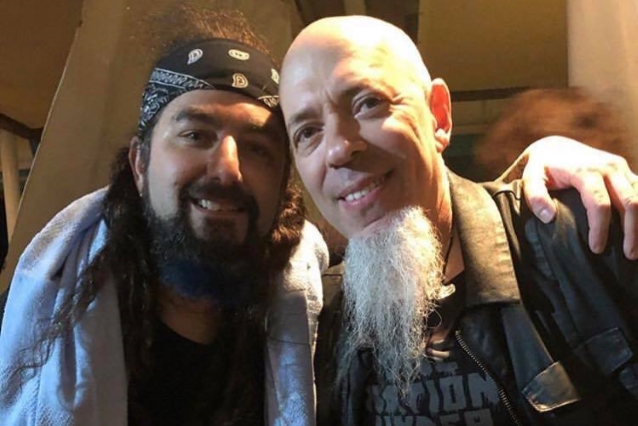 Asked in a new interview with The Razor's Edge what it was like for him and his bandmates to see Portnoy at the New York concert, DREAM THEATER keyboardist Jordan Rudess said: "I'm so glad he [came out]. What a cool thing to be able to see a DREAM THEATER show — something that I never get to do… So I was thinking it was probably pretty cool for Mike to see DREAM THEATER. And it was really nice of him to come out and I think it was great he healed the dynamics with everybody as well. Yeah, it was great."

As for his personal relationship with Portnoy, Rudess said: "Mike and I continue to work together. We've done the LIQUID TENSION EXPERIMENT not all that long ago, and we had a great time doing it. It was almost like we never skipped a bit. So, he and I are friends, and we just kind of kept out relationship going.

Earlier in the month, LaBrie told Sonic Perspectives that it was "great" to reconnect with Portnoy at the New York show. "The thing is that you get to a point in life where you've gotta… You can't carry around that. Don't carry around hate; don't carry around negativity," LaBrie said. "We carried it around far too long, as far as I'm concerned, and it didn't serve any purpose; it just served frickin' division. It was very divisive and very damaging.

Since the 2010 departure of Portnoy, Petrucci, along with Rudess, has taken on much of the songwriting load for DREAM THEATER, including 2016's controversial double concept album, "The Astonishing", 2019's "Distance Over Time" and the band's latest LP, 2021's "A View From The Top Of The World".