JOURNEY will return to The Colosseum at Caesars Palace in Las Vegas, Nevada with a special symphony performance for one night only on Saturday, December 18, 2021 at 8 p.m.

Last month, JOURNEY shared a new single, "The Way We Used To Be". The song is the multi-platinum band's first new music since 2011's album "Eclipse", and the first song released by the band's revamped lineup featuring Neal Schon (lead guitar, backing vocals),Jonathan Cain (keyboards, backing vocals),Arnel Pineda (lead vocals),Randy Jackson (bass),Narada Michael Walden (drums) and Jason Derlatka (keyboards, backing vocals). "The Way We Used To Be" marks Walden and Derlatka's first studio recordings with the band, and Jackson's first since 1986's "Raised On Radio". The song was produced by Narada Michael Walden at his Tarpan Studios, with co-production by Neal Schon and Jonathan Cain.

Schon said of the new song: "The first song, 'The Way We Used To Be', came out of one of the many loops I'd written while the long downtime continued with the pandemic we all had to deal with. So utilizing my time and trying to keep fans in touch I started posting many jams and loops I created very quickly most every day. On 'The Way We Used To Be', I laid down the keyboard loop with over-dubbed rhythm and a little blues lead guitar and sent to Jonathan. He sent it back very shortly after with demo vocals and lyrics and I said to myself with a smile — we've still got it!

"I felt Jonathan nailed the lyrics and melody with haunting chorus 'got to get back to the way we used to be.' So this was the complete new beginning chapter for JOURNEY — many more follow the same sequence with all of us collectively writing and working together. We now have over 26 songs that we've written and whittling it down to 10 or 12. We are very excited by all the new musical endeavors we've created together looking forward to getting back on the road to you."

The band also shares the music video for "The Way We Used To Be", directed and produced by Andrew Seth Cohen and Ryan Kieffer, with animation produced by Confidential Creative.

This past January, Schon told Rolling Stone that he and his JOURNEY bandmates were "deep in" the writing and recording process for their next studio album. "It's coming along, man," the guitarist said. "It's really shaping up. Narada and I have been working nonstop. Jonathan is also working from his houses in Florida and Nashville. Arnel is working from Manila. Randy Jackson is working mostly from L.A. And it's one of those Zoom sessions and it sounds phenomenal. It sounds like we're all playing in the room at the same time. I actually can't wait until we do get together and start putting the show together."

Asked how the new JOURNEY members have changed the band's sound, Neal said: "You have to hear it for yourself. It still sounds very much like JOURNEY thanks to the songwriting, my guitar playing, and the vocals. But the rhythm section is definitely a powerhouse. Narada has been known for years, and Randy Jackson is a completely monstrous bass player. Some people may not be aware of his work, but they have credentials that go way, way back. Randy and I have always been pretty in tune, and Narada and I are in tune. And now it's coming together. It's got a new strut to it.

"There's nothing we really can't play," he added. "I've got a track I laid down with Narada the other day. I sent it to Arnel and he was freaking out. He said, 'This sounds like brand-new [Jimi] Hendrix or Prince. Please write more of that.' And I was just messing around. It was just a jam we did and it turned out to be monstrous. We're creating. We aren't afraid to go to new places. It's easy to stay safe and write where we have always been. We have a bit of that so we don't lose everyone, but at the same token, this is a new chapter of JOURNEY. I want to go where we have not gone before."

The new JOURNEY lineup performed a socially distanced version of "Don't Stop Believin'" for UNICEF USA's virtual event "UNICEF We Won't Stop", which aired in May 2020 on MSNBC. That same month, JOURNEY was supposed to launch a North American tour with THE PRETENDERS, but canceled the trek amid the COVID-19 pandemic.

Last fall, Schon told "Trunk Nation With Eddie Trunk" about JOURNEY's split with Valory and Smith: "The way things went down was really not that kosher. I mean, what should have happened, rather than them trying to take over at that point, was to call us up and say, 'Hey, let's sit down and talk about this.' Instead, it went a different way. And both myself and Jonathan didn't appreciate it." 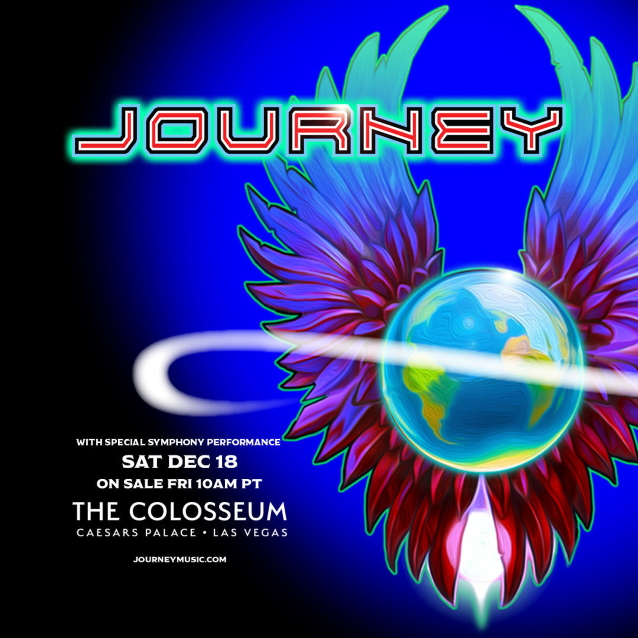