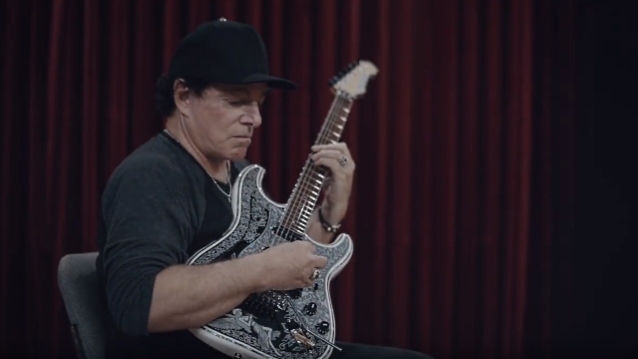 Neal Schon, founder and legendary lead guitarist for Rock And Roll Hall Of Fame band JOURNEY, has announced the launch of a new augmented reality application, StraxAR, that will combine entertainment, exclusive "sneak peek" distribution of new music and events, and present rewarding retail opportunities. Augmented Reality brings the digital world together with the physical world by "augmenting" digital content or a digital experience onto a physical object or image. In the case of StraxAR, millions of Schon's album covers, posters, and other imagery are being combined to form network that will be able to showcase his legendary music, performances, and new material for fans around the world. StraxAR also will enable Schon to change content at will, effectively "broadcasting" it across millions of target images continuously. For launch, Schon will be adding to the image library every "STOP" sign in America — the signs being one of the image targets.

"Last week we launched our commerce site, NealSchonMusic.com, and promised more to come — today we are fulfilling our promise by delivering an exciting app that gives the fans a whole new way to get closer to what we are doing," said Schon, "the platform will allow us to very quickly release material worldwide and share it in this unique way, combining it with all kinds of rewarding experiences for our fans."

"Neal has incredible insight into how people think and feel and a creative mind that never stops" said Eric Singleton, CTO of Strax Technologies. "During the development process, it was invaluable to have his feedback as we brought the whole concept together to deliver an experience fans will want to have again and again."

"The opportunity to film Neal Schon and 'Journey Through Time' in the studio has been incredible, requiring a new production approach for AR, capturing the authenticity of the moment", said Lee West, creative officer for Strax.

To use the application, one simply launches it on their device (iPhone or Android) and points it at the "target" image. In seconds the experience begins. There is an "Image Targets" button in the app that references which images are active (at the moment every major album cover that Neal Schon has played on, and any STOP sign in the country too).

"This approach to augmented reality delivers a powerful expression of music and entertainment in the real world the user is immersed in," said Alan Mariotti, technologist and cybersecurity advisor for Strax Technologies, "its simplicity and ability to deliver multiple experiences quickly jumps over earlier boundaries."