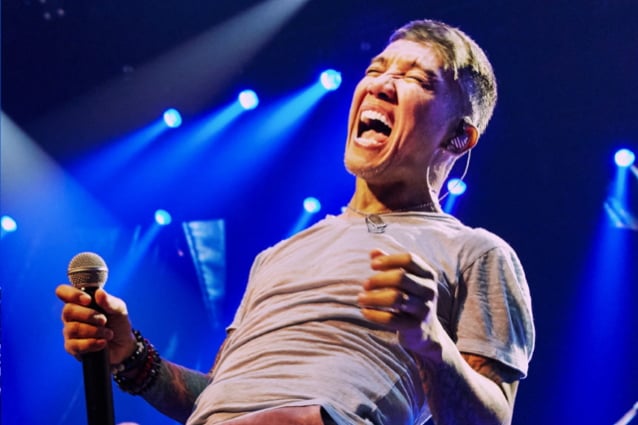 JOURNEY singer Arnel Pineda says that meeting the band's original vocalist Steve Perry was "one of the most glorious moments" of his life.

Pineda and Perry finally crossed paths when JOURNEY and its former singer shared the stage at their induction into the Rock And Roll Hall Of Fame in April 2017. While accepting the award, Steve spoke warmly about his former bandmates, as well as the man who replaced him. "I must give a shout-out to a man who sings his heart out every night, Arnel Pineda," Perry said.

Speaking to the "Infectious Groove" podcast about that unforgettable night four years ago, Pineda said (hear audio below): "[Steve was] so gracious and so generous. I cannot believe how kind he was, how welcoming he was when he embraced me and I embraced him and I looked him in the eyes. That honesty, I felt it, when he looked at me straight in the eye and he told me, 'It's amazing to meet you.' And then thanking me up on the stage. I was literally just 18 feet away from him, behind him, and he was thanking me in front of a sold-out crowd at Barclays [Center] for my relentlessly and tirelessly singing the [classic JOURNEY songs] for the past 10 years. It was one of the most glorious moments of my life.

Although Pineda did not get inducted with his bandmates, he did get up and join them at the Hall Of Fame induction ceremony, singing "Don't Stop Believin'" and "Lights". He was talked into appearing by JOURNEY's manager John Baruck.

"For the record, I never really wanted to be there because I respect Mr. Steve Perry so much and I think that Rock And Roll Hall Of Fame induction, that's for them, you know?" Arnel told the Arizona Republic. "It's for the band and not for me. I was really adamant about not being there.

"And then it was so gracious for Steve Perry that he doesn't want to sing and said that it should be me that should be singing with the band," Pineda continued. "I said, 'It's not right. It should be them playing together and singing together. I was kind of shaky. I mean, how would you feel when your hero is watching you singing his legacy?"

Three years ago, Perry told SiriusXM that he didn't perform with JOURNEY at the Rock Hall ceremony because he is "not in the band. I haven't been in the band for quite some time," he explained. "Arnel's been in the band for almost 10 years, I think. He's a sweet kid — he's a wonderful kid. He sings his heart out every night. It's his gig."

As for meeting Pineda before the induction, Perry said: "There was something endearing about the way he looked at me. He was meeting, like, a grandfather. [Laughs] He's got the gig. It's his gig. He's doing great."

Born in the Philippines, Pineda has been fronting the legendary rockers since 2007 when JOURNEY guitarist Neal Schon discovered him leading a Manila cover band on YouTube.