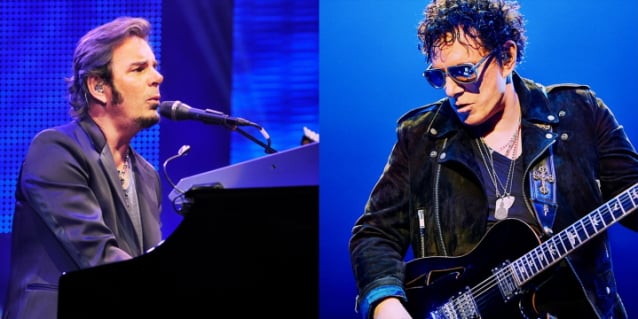 JOURNEY keyboardist Jonathan Cain has filed a lawsuit against Neal Schon, alleging that the guitarist caused over $1 million in personal expenses to be charged to the band's shared American Express card, including $400,000 in a single month last year.

Cain's allegations come more than two months after Schon filed a lawsuit against his longtime bandmate, contending that he was being denied access to the American Express card.

According to Cain's lawsuit, "Schon's charges placed considerable pressure on JOURNEY and its ability to cover normal tour expenses. Schon was spending JOURNEY's money, and Cain is the one who was and is ultimately liable for the AMEX Account and Schon's charges on the AMEX Card. Even with the $30,000 limit on Schon's card on the Nomota AMEX account," referring to the company Cain and Schon set up to operate the band, "Schon still managed to spend hundreds of thousands of dollars in additional, excessive personal expenses through other tour personnel and travel agents. For example, the budget allocated a maximum of $1,500 per night for hotel rooms for Schon and Cain. However, Schon demanded to stay in hotel suites that cost in excess of $5,000 per night. After the recent tour ended in Honolulu, Hawaii, Schon stayed an extra week in a hotel suite that cost $6,000 a night and charged more than $100,000 in expenses to the AMEX Account."

In a statement to Billboard, Schon's attorney Skip Miller called allegations "ridiculous" and "as phony as a three dollar bill." He said the countersuit was merely "sour grapes" after a recent incident in which Schon demanded that Cain stop playing events for former U.S. president Donald Trump. "We want Cain to just focus on JOURNEY and its fans," Miller said.

"Neal Schon should look in the mirror when he accuses me of causing harm to the JOURNEY brand," Cain said in a statement. "I have watched him damage our brand for years and am a victim of both his — and his wife's — bizarre behavior."

An attorney for Schon sent a cease-and-desist letter to Cain after he performed at Trump's Florida estate.

The latest legal move came a few weeks after Schon filed his lawsuit against Cain. Cain, for his part, accused Schon of misusing the card, citing his "excessive spending and extravagant lifestyle."

A month earlier, former JOURNEY singer Steve Perry took legal action against both Schon and Cain, asking them to stop registering federal trademarks on the names of many of the band's hits.

Rolie was JOURNEY's first singer, though his role quickly diminished when Perry arrived in 1977. Gregg left JOURNEY in 1980, just before the band achieved its commercial heights.

JOURNEY's tour with TOTO will kick off on February 4 in Allentown, Pennsylvania. Presented by AEG Presents, the "Freedom Tour 2023" will make stops in Austin, Montreal and Memphis before wrapping April 25 at the brand-new Acrisure Arena in Palm Springs, California.

The 2023 run includes rescheduled dates in Washington, D.C., plus Hartford, Toronto and Quebec, which were postponed last year due to the coronavirus.