JUDAS PRIEST: 'Decade Of Domination' Book Due In June

When the world thinks of heavy metal in its pure, potent, undiluted form, it is none other than the Metal Gods, JUDAS PRIEST, that instantly come to mind. Chrome and black leather, studs and whips and chains, a chopper on stage to announce the coming… these are the tools of the trade for Rob Halford and his legendary band of Birmingham bashers.

Indeed, the PRIEST are the bringers of metal's biggest anthems. "Breaking The Law", "Living After Midnight", "Exciter", "Electric Eye", "Victim Of Changes" and especially "You've Got Another Thing Comin'"… these are songs woven into the fabric of metal's wild ride, PRIEST having been there since its origins, revving up crowds as superstars certainly for 30 years of that run.

Lifelong fan and preeminent metal historian Martin Popoff examines the PRIEST's rich legacy from 1974 to 1984, album by album, anthem by anthem, in this hugely expanded update on the early years portion of his long-out-of-print "Heavy Metal Painkillers" book.

Having interviewed all the principals in the band repeatedly over the years, Popoff gives a first-hand account of PRIEST's rocky, often comical ride through the '70s, and through the gold and platinum records of the '80s, expertly detailing the long road to the arena headline status the band now enjoys as heavy metal's proudest ambassadors.

To reiterate, this is the most extensive analysis ever in book form of:
"Rocka Rolla", "Sad Wings Of Destiny", "Sin After Sin", "Killing Machine/Hell Bent For Leather", "Unleashed In The East", "British Steel", "Point Of Entry", "Screaming For Vengeance" and "Defenders Of The Faith" — song by song, lots of stories, looking at licks and fills, and what's in the right channel and left, lyric analysis… the deepest dive ever on these records. 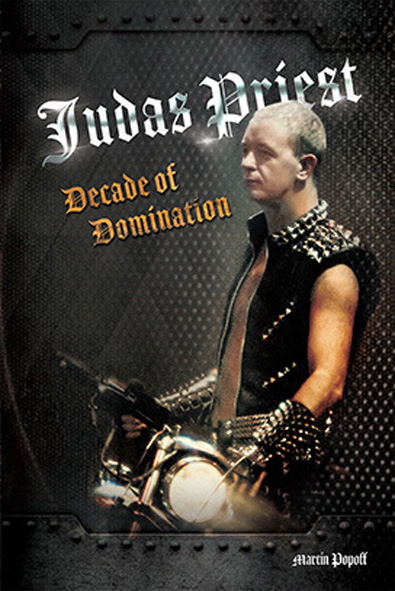