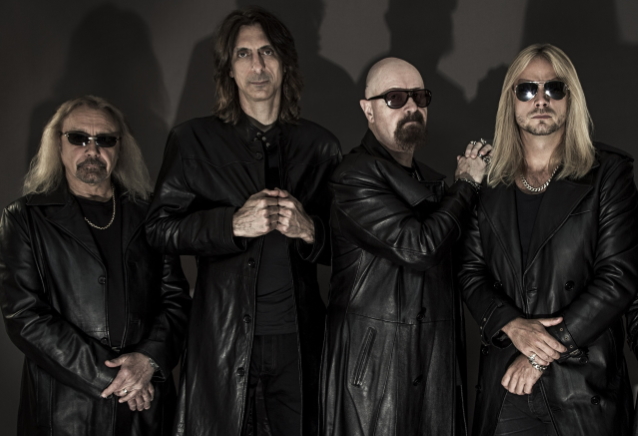 In a brand new interview with Canada's The Metal Voice, JUDAS PRIEST guitarist Richie Faulkner once again spoke about the band's recent announcement that it would embark on the next leg of its 50th-anniversary tour as a quartet. Addressing the fan backlash which led the band to reverse its decision to tour as a four-piece, Richie said (as transcribed by BLABBERMOUTH.NET): "I think it's a really powerful indication of how much PRIEST still means, really. I don't think we expected that much [pushback from the fans]. [Laughs] 'Cause we all thought — for good or bad — we made a decision because we thought it would be a good idea; that's the real crux of the matter. Otherwise we wouldn't have made the decision. We knew there would be some voices raised, because that's the brand of JUDAS PRIEST and it has been for 50 years. And the fans, boy, did they let us know. And that's fan-fucking-tastic. And we listened. And no harm, no foul. It's all back to as it was and we're going out as it was gonna be. It's a big thank you, really, to the fans for caring and letting us know what they felt. And boy, did they let us know what they felt about it. So, yeah, all good. All's well that ends well, really."

When interviewers Jimmy Kay and Alan Dixon pointed out the fact that even SAXON's Biff Byford weighed in on PRIEST's plan to tour as a quartet, Richie said: "I get it. I think we all get it. I think Rob's [Halford, PRIEST singer] voiced his opinion on it. He had the idea. And again, from my point of view, the guys have been doing this for 50 years — they know better than I do, if you know what I mean. And if that's what they wanna do, that's what we do. And it was on me to do that, and I would have made it happen. If that's what we were gonna do, I would have made it happen. Some people would have liked it; some people wouldn't have. But I get it."

Faulkner added: "[JUDAS PRIEST] were one of the pioneering, if not the pioneering band in heavy metal at that time. I mean, you had bands like WISHBONE ASH and THIN LIZZY, but as far as taking the torch into that arena of heavy metal, JUDAS PRIEST were it. So I think to go to a four-piece at this point, a celebratory tour of 50 years, of those songs, was a bit jarring, to say the least. So we listened. We get it. And as I said, all's well that ends well. It's good the fans — I mean, they must really care, so I can only thank them for that. There's an outlet for that voice — the Internet is an outlet for that voice, good and bad. Sometimes there's some crap out there, but that was really what people felt and they cared enough and they voiced it. And fair play. So here we are — we are a five-piece again; Andy's [Sneap] back. And again, if Glenn [Tipton] can make it — I know he wants to — then he'll be out there as well when he can be."

On January 10, PRIEST revealed that it would perform as a four-piece when it returns to the road in early March. A few hours later, the band's touring guitarist Andy Sneap, who co-produced the group's 2018 album "Firepower", released a statement to BLABBERMOUTH.NET in which he said that he was "incredibly disappointed" by PRIEST's decision to carry on as a quartet and thanked the Halford-fronted outfit for the "mind-blowing" opportunity to share the stage with one of his favorite bands. Meanwhile, PRIEST fans were understandably upset about the band's decision to forgo its classic twin-guitar attack sound and made their feelings known on social media. Some even called for the return of guitarist K.K. Downing, who joined PRIEST in 1970 and remained in the group until 2011.

On January 15, JUDAS PRIEST released a statement announcing that it was reversing its decision to tour as a four-piece, explaining that the bandmembers "decided unanimously" to continue their live shows "unchanged" with Rob, Faulkner, Ian Hill (bass),Scott Travis (drums) and Andy.

Earlier in the month, Halford told Billboard about PRIEST's short-lived plan to embark on its 50th-anniversary tour as a quartet: "That all came from me, it didn't come from the band. Of course, that blew up in my face, didn't it? To have done something like a four-piece now would've been just not right, ridiculous, insane, crazy, off my rocker, have a cup of tea and relax. It's kind of water under the bridge now. I think my heart was in the right place, but I'm not the first musician to have a crazy idea."

Sneap, who is also known for his work in NWOBHM revivalists HELL and cult thrash outfit SABBAT, began touring with PRIEST four years ago after Tipton — who was diagnosed with Parkinson's disease eight years ago after being stricken by the condition at least half a decade earlier — announced in early 2018 he was going to sit out touring activities in support of "Firepower".

Hill is the sole remaining original member of PRIEST, which formed in 1969. Halford joined the group in 1973 and Tipton signed on in 1974. Rob left PRIEST in the early 1990s to form his own band, then came back to PRIEST in 2003. Downing parted ways with the band more than a decade ago and was replaced by Faulkner.

Last month, Downing said in an interview that it was "very, very strange" for PRIEST "to even think about" the possibility of going out as a quartet. "I'm like everybody else. I'm totally bemused," he told the "Rock Of Nations With Dave Kinchen" classic rock show. "It was just so extreme and insulting in a way, I guess, and insulting to Glenn as well. It was kind of a slap in the face, saying, 'Okay, you two guys did it, but we think just one guy could do what…' It kind of made us and everything that we've done and created, saying it was all superfluous, really, and didn't really have the value that… I'm sure Glenn will agree with me that it does have a value."