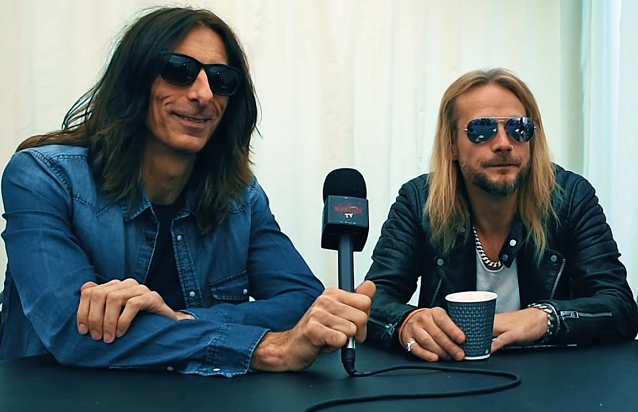 Scott Travis says JUDAS PRIEST got to know producer Andy Sneap well enough during the "Firepower" recording sessions that they felt comfortable asking him to fill in for guitarist Glenn Tipton, who had to retire from full-time touring activities due to his diagnosis with Parkinson's disease. While there were plenty of talented prospects available, the deciding factor to hire Sneap was the band's camaraderie with the British-born, 49-year-old, who in addition to his impressive resume as a producer, was guitarist for cult U.K. thrashers SABBAT and currently plays with NWOBHM revivalists HELL.

In an interview with Bloodstock TV conducted prior to PRIEST's August 10 appearance at this year's Bloodstock Open Air festival, Travis and guitarist Richie Faulkner were asked if PRIEST tried to recreate elements of its classic sound on "Firepower". "I don't think it was a conscious thing to recreate anything," Richie said. "But, I think there's elements of it which were a return to the old way of doing stuff, like playing together, rehearsing the songs together, which, I think Scott will vouch for, I don't think the band hasn't done since 'Painkiller'. You get in a room together and rehearse. It's a good 30 years ago [that PRIEST last did that]. Elements of that are the same as it was before. Apart from that, in regards to the songwriting, I think the band is always trying to do something new or better themselves as writers and players and band members and as a band. I don't think that's anything different with 'Firepower'. Everything sort of aligned. We got Tom Allom back as producer, and Andy Sneap, obviously, as a producer. I don't think there was any kind of goal to recreate anything from the past. It just PRIEST doing what PRIEST do and that really came across. The production team captured that."

The pair was then asked what has kept PRIEST going in a career that, in 2019, will have reached the 50-year mark. "I don't know if it's anything distinctive with PRIEST," Scott said. "We do what we do, and the guys wrote a really cool record, this last record. I think you're only as good as your last product — in this case, it's a record. So, we have had good success with the record — the fans love it; that's the main thing. Obviously, every band you talk to, whenever they release something, it's the best thing they've ever done. That's what you're supposed to say, whether you're an actor who has just released a movie or someone has written a book. That's par for the course. The fans, that's who we work for. We don't work for ourselves; we work for the fans. They seem to like it. We don't really do anything specifically different. We just try and do the best we can and perform to the best of our ability."

Conversation then shifted to Sneap, who has been filling in for Tipton since the start of the "Firepower" world tour in March. While former guitarist K.K. Downing has been very vocal in his desire to return to PRIEST, the band has opted to go with Sneap because of their comfort level with the veteran knob-twiddler. "The main thing people maybe don't recognize, especially people who aren't musicians or in bands, it's a lot to do with camaraderie and how you get along with people," the drummer said. "There's a million guys who can play guitars, drums and bass, but it's having a camaraderie. Obviously, when we did the record with Andy, everybody got to know him very well. That's another reason why it was a logical choice."

Tipton was diagnosed with Parkinson's disease four years ago — after being stricken by the condition at least half a decade earlier — but only recently announced he was going to sit out touring activities in support of "Firepower". The guitarist, who is now 70 and has performed on every PRIEST record since the band's 1974 debut set, "Rocka Rolla", is not quitting the band, but simply cannot handle the rigorous challenges of performing live.

"Firepower" entered the Billboard 200 chart at position No. 5, making it PRIEST's highest-charting album ever.