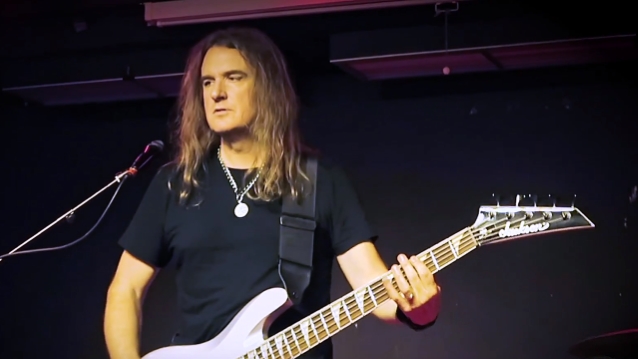 On what made him start his "Basstory" spoken-word tour:

David: "I've done a lot of clinics per se, and I've done some things inside of music schools, Berklee College [Of Music], for instance, over in the United States. But I've done a lot of clinics for Jackson Guitars and my Hartke amplifiers, but a lot of that has gone away a little bit, especially in the United States. 'Basstory', for me, was a way to take the spoken word and the best of a clinic and put it together in a more musical setting where it's a little more cohesive. Again, building a band and it's a nice institute setting where the students are here because they're in and around music every day, all day, so they really grasp it. Sometimes with 'Basstory' when we're in sort of a concert setting, that's more like a bass clinic where you can buy beer and merchandise."

On the status of the follow-up to MEGADETH's 2016 "Dystopia" studio album:

David: "It is coming along. We learned from 'Dystopia'. 'Dystopia' took about a year to write. It took another four months to record, overdub, mix it — even longer, maybe six months. So, these things take time and I think putting the time into it shows. I think 'Dystopia' was a fan favorite, a critic favorite, a Grammy favorite, so it was worth taking the time to do it right. That's what we're doing on this album."

David: "We talked on the bus probably two years ago — me and Dave [Mustaine, vocals/guitar] and Kiko [Loureiro, guitar], we sat in the front lounge of the tour bus as we were driving from Casper, Wyoming, to Las Vegas; it was a very long drive. One morning, we were sitting having coffee, where all good ideas start in MEGADETH, over a cup of coffee, and we were just brainstorming about different things we could do besides make an album, go on tour. The cruise was one of them. What became the 'Megadeth Boot Camp' was another one that we did. So it's nice to see these ideas come to fruition. They take some time to put together. But it's fun to be able to do some other things that sort of expand this kind of a V.I.P. experience for the fans. Different ways that they can be part of being in and around the band on a much more personal level. I think with the cruise, we're going to some different ports that most of the other rock and roll cruises don't go to. It's a good lineup. It's heavy. I think it's what a metal fan wants to see. I think it's very focused and should be a lot of fun."

On being honored in his hometown of Jackson, Minnesota with "David Ellefson Day":

David: "It's pretty cool. It's very cool, actually. I kind of thought for my day I'd get the day off, but for my day there's, like, a ton of stuff that you do. But it's obviously a huge honor, and especially to come from a little town. I used to sit in that school in Jackson, Minnesota, in that high school, at those desks, and dream about the day that I could go hopefully be a rock star and come back into town, and that day has happened. And it's interesting that when you go through the things you do in a band and just this ride to get to the top of your field, when you get there, it's very different than when you thought it was when you're trying to get there or when you had dreamed of being there. And for me, to be honored with the day is wonderful, but I don't want it to be just a prideful moment. I'm proud of the moment, but I want it to be something where it gives me an opportunity to do something with all of the things I've collected in my career and give back, and that's why I formed the David Ellefson Youth Music Foundation. It was to form a non-profit that we can raise money to give grants and scholarships and instruments to especially music school programs. Largely in America, when budget cuts come, the music and the arts go first, and they keep the football teams and the sports, because… I don't know why — barbaric sports like football. I guess everybody likes to watch someone get beat up, which is why that stays in. But things like music, which are also very mathematically… very intrinsic with mathematics and things like that, they get cut. And, to me, when they're taking those programs away, it's like the people we saw here today that are in a music institute — this is what we live for, this what turns our engine on in the morning and gets us excited. So if our music foundation can help put instruments, education and be the wind in the sails of these music programs in need, then I think that's worth having 'David Ellefson Day' for — to have the music foundation."

Ellefson is currently the middle of his "Basstory" world tour, with shows across America and Europe.