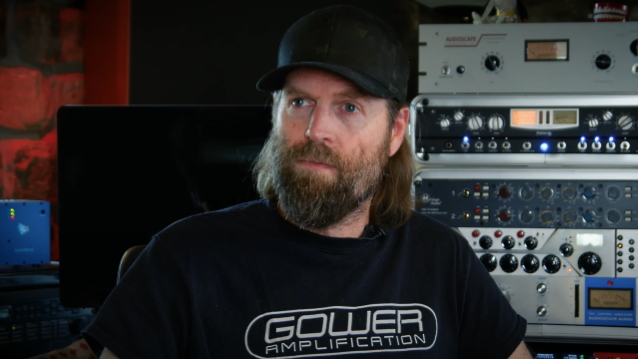 Noted metal producer and current JUDAS PRIEST touring guitarist Andy Sneap spoke to Glenn Fricker, engineer at Spectre Sound Studios, about what it was like to work with PRIEST singer Rob Halford on the band's latest album, 2018's "Firepower". He said: "People go on about [Rob's] screams, but his timing, to me, and the way he snaps the lines and syncopates things, that's what makes it Rob Halford. And also his accent, that Birmingham accent, there's a little bit of that drawl in his voice when he's singing that you don't really hear out of an American singer. So there's a little bit of that in there that gives it some character and flavor, too. And he's loud as well. I'll tell you, when you're sat in the control room and he's just working ideas out and he's sitting next to you, it's, like, 'Oh, fucking hell.' [Laughs] There's that voice."

Five years ago, Sneap, who worked on the follow-up to 2014's "Redeemer Of Souls" with PRIEST's longtime collaborator Tom Allom and engineer Mike Exeter (BLACK SABBATH),told Serbia's Hardwired magazine that "Rob did great" during "Firepower"'s final recording sessions. "I'll tell you what: for someone who's got that much experience, there's no ego there at all," he said. "We'd do, like, six or seven passes, and I'd ask him to try something a bit [different] on this part, and he was, like, 'No problem.' And he'd give me another four takes with a slightly different vibe. And then me and Tom Allom would sit there and we'd comp it, and we pretty much agreed on everything."

Before "Firepower"'s release, Rob told "Trunk Nation With Eddie Trunk" that collaborating again with Allom, who produced every PRIEST release from "Unleashed In The East" (1979) through "Ram It Down" (1988),along with several live records since then, had been "brilliant" and "absolutely fantastic." "Tom has a rich history with PRIEST, particularly those great moments with 'Screaming For Vengeance', 'Defenders Of The Faith' [and] 'British Steel'," he said. "My God — he's the man in that respect. So I thought it was really great for Andy Sneap and Mike Exeter to accept that this was gonna be like a three-man job, with Andy mostly holding the reins, but with Tom by his side and Mike there [as well]."

Nearly two years ago, Halford confirmed that PRIEST's next album would see the band reuniting with the "Firepower" production team consisting of Sneap, Allom and Exeter.

Sneap began touring with PRIEST four years ago after longtime guitarist Glenn Tipton — who was diagnosed with Parkinson's disease eight years ago after being stricken by the condition at least half a decade earlier — announced in early 2018 he was going to sit out touring activities in support of "Firepower".

Three years ago, Sneap said that he would continue to play guitar for JUDAS PRIEST "as long as they want me to." During an appearance on the "Talking Bollocks" podcast, Sneap stated: "It'd be great if Glenn was up there doing it. That's the thing that really… it's always in the back of my mind; it really is. But it's just nice that he asked me to do it. As long as they want me to help out, I'll help 'em out. That's kind of the way I'm looking at it, really."

In January, JUDAS PRIEST reversed its decision to remove Sneap from its touring lineup. The U-turn came days after PRIEST's original announcement, in which the group said it had planned to resume its "50 Heavy Metal Years" tour as "an even more powerful, relentless four-piece heavy metal band." Sneap later released a statement expressing his disappointment with the decision, while fans were understandably upset about the band's choice to forgo its classic twin-guitar attack sound. Some even called for the return of guitarist K.K. Downing, who joined PRIEST in 1970 and remained in the group until 2011.