Joining JUDAS PRIEST at the event will be SABATON, LACUNA COIL, SOULFLY, MUSHROOMHEAD and UNCURED.

For more information and tickets, go to warlandofest.com.

JUDAS PRIEST is continuing to work on material for the band's follow-up to "Firepower" album. Released in March 2018, "Firepower" was the second LP to feature Richie Faulkner, who was selected to fill the void left by founding guitarist K.K. Downing following his exit in 2011.

Bassist Ian Hill is the sole remaining original member of JUDAS PRIEST. Singer Rob Halford joined JUDAS PRIEST in 1973 and guitarist Glenn Tipton signed on in 1974. Rob left PRIEST in the early 1990s to form his own band, then returned to PRIEST in 2003.

Prior to being canceled due to the coronavirus pandemic, JUDAS PRIEST's spring/summer 2020 European tour was scheduled to kick off on May 30 in Helsinki, Finland and conclude on July 28 in Tilburg, the Netherlands. The band was also slated to headline the U.K's Bloodstock Open Air festival on August 9 at Catton Park, Derbyshire.

The U.S. leg of the "50 Heavy Metal Years" tour was due to launch September 9 in Oxon Hill, Maryland and wrap up on October 17 in Las Vegas, Nevada. 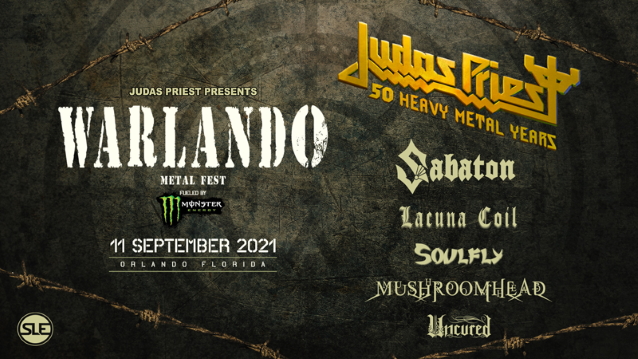