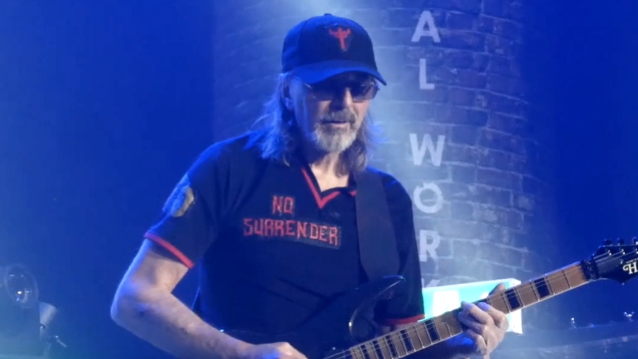 A year ago, it was announced that Reach Music Publishing had acquired a 50-percent interest, as well as worldwide administration rights, to the Glenn Tipton song catalog. The acquisition covers Tipton's songwriting catalog of almost 200 songs as a member of JUDAS PRIEST, including works dating back to 1977, beginning with the album "Sin After Sin" and continuing through to the band's last studio album, "Firepower", released in 2018. Tipton's solo albums, "Baptizm Of Fire" and "Edge Of The World", are also included in the acquisition.

Asked in a new interview with Consequence what the thought process was behind him selling a 50-percent interest in his song catalog, Tipton said: "Basically, I've always been happy with Sony. But they're not proactive. And a lot of my songs on my solo albums — not PRIEST — have got very strong character and emotions, on a personal level. You couldn't really release that on PRIEST's catalog. So, I found a company, Reach Music, and they're just wonderful. They actually concentrate on proactive more than normal. I just liked the way they worked, the things that they say; they know what they're talking about. They haven't just picked up a brochure and read a couple of titles and quoted those. They know the PRIEST music and my solo stuff — and they're working hard on a proactive level, to get them up and running."

As a member of JUDAS PRIEST, Tipton has written or co-written iconic tracks and radio staples including "Breaking The Law", "Heading Out To The Highway", "Hell Bent For Leather", "Living After Midnight" and "You've Got Another Thing Coming", all of which are included as part of the Reach agreement.

Tipton was diagnosed with Parkinson's eight years ago — after being stricken by the condition at least half a decade earlier — but announced in early 2018 he was going to sit out touring activities in support of "Firepower". He was replaced by "Firepower" album producer Andy Sneap, who is also known for his work in NWOBHM revivalists HELL and cult thrash outfit SABBAT. Tipton occasionally joins PRIEST onstage for its encores, performing "Metal Gods", "Breaking The Law" and "Living After Midnight".

In 2018, Tipton's former PRIEST bandmate K.K. Downing sold his share of the royalty rights to 136 of PRIEST's tracks, including classic songs "Breaking The Law", "Living After Midnight" and "Painkiller", to Round Hill Music. The rights consist of the guitarist's publishing and writer's share, and his artist royalties from the master recordings.

K.K., who is a founding member of the British heavy metal legends and was part of the group since 1969, announced his retirement from PRIEST in April 2011.