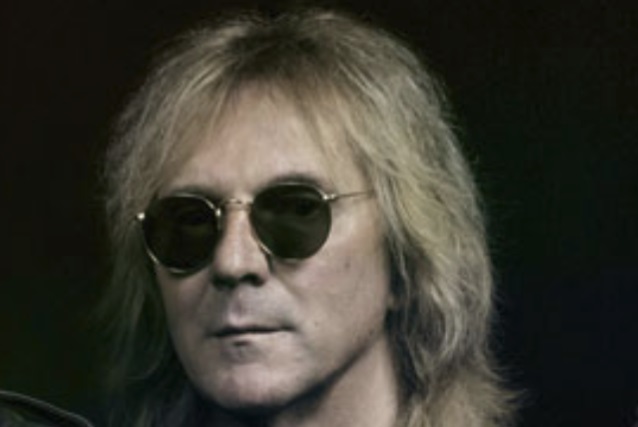 JUDAS PRIEST's GLENN TIPTON: 'I Was Shocked When I Was Diagnosed' With Parkinson's Disease

JUDAS PRIEST guitarist Glenn Tipton says that he was "shocked" when he was first diagnosed with the later stages of Parkinson's disease.

Speaking to Tim "Hitman" Hartt of 105.7 WAPL about his condition, Tipton said (hear audio below): "It's a weird thing, because I knew something was wrong, but you don't like to admit it to yourself, and maybe delayed getting it diagnosed. And I was sort of shocked when I was eventually diagnosed and they told me that I've had it for over 10 years. And it answered a lot of questions, you know, for me. But... life goes on. There's a lot of people who are suffering, and you've just gotta get on with life and do your best."

Tipton went on to describe Parkinson's as "a pretty cruel disease. It gets you in that way," he said. "Some days you have good days, some days you have bad days, and I suppose the older you get, you get more and more bad days. But it's great to have a goal in life, and my goal in life is to tread water, not sink — swim and just beat it in any way I can. So it's good to have that ambition in life, that goal, something to aim for. And that's how I'm approaching it."

Tipton rejoined his PRIEST bandmates on stage Tuesday night (March 20) at the Prudential Center in Newark, New Jersey to perform the concert's three-song encore: "Metal Gods", "Breaking The Law" and "Living After Midnight". Asked if he is planning on making more live appearances with the group, Glenn told 105.7 WAPL: "I think so, yeah. As long as I'm capable of going on stage and doing my parts and doing it well. I love it — I love to be on stage with PRIEST, and I'll do it for as long as I can."