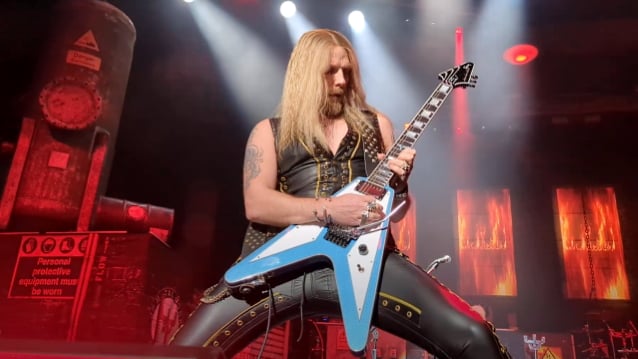 Jayne Andrews, who has been managing JUDAS PRIEST for 36 years, was a guest on a recent episode of "Gabbing With Girlfriends", the new podcast hosted by Gloria Butler, wife and manager of BLACK SABBATH bassist Geezer Butler. During the chat, which can be seen below, Andrews spoke about the fact that current PRIEST guitarist Richie Faulkner wasn't one of the bandmembers who were inducted into the Rock And Roll Hall Of Fame at this year's event, which was held on November 5 in Los Angeles. The PRIEST members that got inducted include current members Rob Halford (vocals),Ian Hill (bass),Glenn Tipton (guitar) and Scott Travis (drums),along with former members K.K. Downing (guitar),Les Binks (drums) and late drummer Dave Holland.

"I did try and get [Richie] to be inducted, but it's all down to how long you've been in the band, and it revolves around a classic album, an iconic album, and he wasn't on that album," Jayne said (as transcribed by BLABBERMOUTH.NET). "I kind of questioned a couple of people, I said, 'Well, he wasn't in that band that long, and Richie's been in longer than he was in when he got inducted.' What I was told was it's to do with some of the classic, iconic albums, the artists who were on there… There's Rob, Glenn, Ian, Scott, and then K.K. and Les Binks. 'Cause I was saying, 'Well, Les Binks was only in the band for two years. Richie's been in it 12 years.' But [Les] was on 'Screaming For Vengeance'; he was on one of the classic albums," she added, apparently meaning to say "Stained Class" instead. "So that's why he's being inducted. So that does actually make sense, when you kind of think of that, really. As they said, 'You look at some bands. They've got so many different lineups, different members.' They said, 'We can't induct everybody.' Once they explained that, then it did make sense."

Back in 2014, Rock And Roll Hall Of Fame Foundation CEO Joel Peresman said that the decision about which members to induct from any band is made by the Rock Hall's nominating committee as well as an adjunct group of "scholars and historians" familiar with specific inductees and genres. Groups get picked for induction for different reasons, he told USA Today, which means the Hall's nominating committee will use different standards when deciding which bandmates to include. "Sometimes, it's the overall body of work; sometimes, it's a specific period in time and the people who comprised the band that put them on the map and gave them that influence and created that legacy," he said.

Although the Rock Hall has historically tended to choose a band's "classic" lineup for induction practically everyone who ever played with THE GRATEFUL DEAD was included when the group went into the hall in 1994. METALLICA and the RED HOT CHILI PEPPERS also have relatively inclusive Hall memberships, with bassist Robert Trujillo getting inducted as a member of METALLICA in 2009 when he had only been in the group for six years and played on one studio album, 2008's "Death Magnetic". Other induction lineups — like those for LYNYRD SKYNYRD and KISS — left out members who sang or played with the group for many years.

Last month, Hill was asked in an interview with Rock 100.5 The KATT if JUDAS PRIEST was involved in the decision-making process about who gets inducted into the Rock Hall, Hill said: "No. That's all the Rock And Roll Hall Of Fame people. They induct who they think is worthy [laughs], for want of a better word. So Ken's [K.K.] gonna be there. He's been a huge part of the band from its inception right up until he left about 10 years now. And, of course, Les Binks is gonna be there as well. And it's a shame poor old Dave Holland, he didn't make it. He's being inducted [as well]. Unfortunately, he died a couple of years ago now, which is a shame, really. But, yeah, everybody that's up there deserves it greatly."

Pressed about whether he would personally do it differently, if he could, and make sure that Faulkner and former PRIEST singer Tim "Ripper" Owens were also being inducted, Ian said: "Richie's gonna be there anyway. He's gonna be up on stage; he's gonna be playing with us anyway.

"I think one of the parameters is you have to have played for the band for 25 years or something like that, or over the last 25 years," Ian said. "And it's got nothing to do with us. If it was up to us, we probably would have inducted [Richie and] Ripper. But it's not up to us. We had no say, really. Pity, but it is what it is."