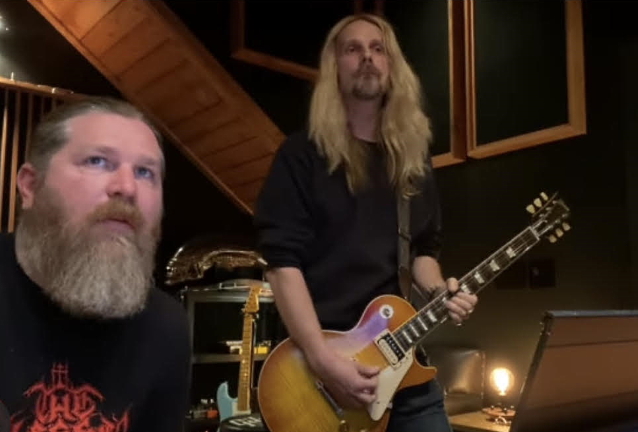 Faulkner tracked his parts last night (Tuesday, December 14) at his home studio, The Falcon's Nest, in Nashville, Tennessee with the help of DEMON HUNTER guitarist Jeremiah Scott, who is producing the LP.

A short video of Richie laying down his guitar lead can be seen below.

Most of "Exile" is being recorded at Jeremiah's studio in Nashville, The Southern Oracle.

Scott is an experienced producer, audio engineer and musician who built The Falcon's Nest for Richie after the PRIEST guitarist moved to Tennessee in 2019.

In addition to producing the last few DEMON HUNTER albums, Jeremiah has helmed various recordings from THE TONY DANZA TAP DANCE EXTRAVAGANZA, LIVING SACRIFICE and PROJECT 86, among others.

Faulkner's guest appearance on the new DEMON HUNTER album is believed to be his first recording since he suffered an acute cardiac aortic dissection during PRIEST's performance at the Louder Than Life festival in Louisville, Kentucky in late September. Faulkner was rushed to the UofL Health - Jewish Hospital where the cardiothoracic surgery team needed approximately 10 hours to complete a life-saving surgery.

DEMON HUNTER's latest release was "Songs Of Death And Resurrection", a mostly acoustic and stripped-down effort which came out in March via Solid State Records. Scott produced and mixed the LP in Atlanta, Georgia, and Nashville. He also produced the band's "War" (2019),"Peace" (2019),"Outlive" (2017) and "Extremist" (2014) records.