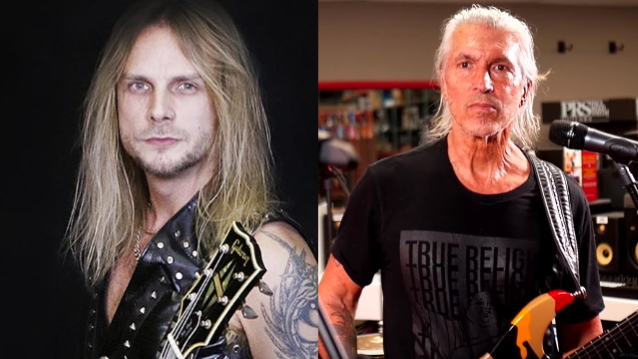 JUDAS PRIEST's RICHIE FAULKNER Talks About Having GEORGE LYNCH As His Father-In-Law: 'He Is A Lovely Guy'

"I was getting a bit bored with [Florida's] incessant heat and humidity," Richie said. "Now, I love Florida, but Christmas day was like a day in mid-August. And growing up in the northern hemisphere, in England, Christmas was cold and it was pubs with a roaring fire and a baked potato and stuff like that. So I just wanted some autumn, some fall weather, and I wanted to look forward to the seasons. When the season of spring rolls around after a four-month winter, you look forward to it and you appreciate it and you enjoy the sun. So I was just looking for a change, and my better half knew a few people in and around Nashville. And there was a couple of options. And I know a couple of people in Nashville as well. So we looked here and we found a place, and the rest is history, so to speak. So it wasn't really for the music, the opportunities and stuff like that — I knew a few people here because of the music scene, but it was just I fancied a changed and wanted somewhere a bit more green. So that's basically what it is. I'd love to say it was for the music, but it wasn't, really… It's a beautiful part of the world. It's got some green where we are."

According to Faulkner, who recently became a father, his desire find a suitable place to raise his kids was a contributing factor in his decision to move to Nashville.

"We found a beautiful house that kind of lent itself to a family," he said. "It was too big for me and the wife, but it was big enough to kind of maybe start putting down roots, and that was part of the semi-plan, and then it just kind of happened that way.

"She's 11 weeks old," Richie said about his daughter. "You count your blessings, really. This whole coronavirus has been brutal to a lot of people, and everyone's affected by it in one way or another. But we [JUDAS PRIEST] were gonna be out [touring], obviously, like everyone else was, this summer just past, for three months or two months in Europe, and I was gonna miss the baby's birth. That's what we do for a living, and my better half is dialed into that. It's just the way the cookie crumbles. But because of all that, that got postponed till next year, I'm here for the baby's birth and this stage of her life. So it's a silver lining. As I said, you count your blessings."

Asked how he likes being a dad, Richie said: "It's a trip, man. It's like you're looking into your own eyes. Like everyone tells you, you can't prepare yourself until it happens. People have got different accounts and different stories to tell you, what to expect, and it all goes out the window once you have it. It's a new set of rules, and nothing can prepare you for it."

Faulkner also talked about what it's like having former DOKKEN guitarist George Lynch as his father-in-law. The baby's mother is George's daughter Mariah Lynch.

"George is a lovely guy; he's like a quiet, humble guy. He's a killer guitar player, as we all know. And he texts Mariah every day: "When can I see my granddaughter?'

"But, yeah, we sat there [and] we played guitar. We talked about guitars. And he's a big PRIEST fan as well; he loves PRIEST. So, yeah, we were talking all night until I put on some Eric Johnson, and then that kind of shut us both up — we didn't wanna play guitar anymore. But he's a lovely guy, man. I think we're gonna see him soon as well."

Richie also jokingly suggested that his daughter will take after him and her grandfather and start shredding the axe.

"It's the next in line of that heritage — George Lynch, LYNCH MOB, DOKKEN, there's JUDAS PRIEST in there, and now we've got a little princess," he said. "So she's the next in line in the gunslingers. EMG pickups, they sent me this beautiful pink flying V for her first guitar. It's absolutely beautiful — bright pink with a little pickup in it. And it actually plays well. So that's her first guitar. So she's well on her way now."