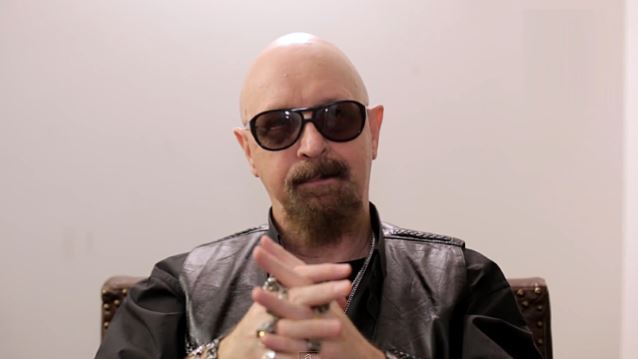 During a brand new interview with The Reverend from Western Canada's "Rock N' Roll Breakfast Show", JUDAS PRIEST frontman Rob Halford spoke about how being clean and sober since January 6, 1986 has affected his live performance as well as his emotional well being.

"Well, it's an incredible life, isn't it?" Halford said. "It's still very much one day at a time. I think that's the only way you can really make it work."

He continued: "I'm leaving a trail behind me by January the 6th of thirty years. And some people are, like, 'Oh my God! Thirty years.' Well, it really isn't that. It's a trail of sobriety that I really know for a fact has helped me in my career and in my life as a musician and as a person. I'd like to feel that I'm better in both worlds in that respect. I think I've improved in a lot of ways because of being able to stay clean and sober. But, you know, it is remarkable. And you can't do it by yourself — you have to use the tools that you're given by other people who have got your back and look out for you. And, again, it comes back, a lot of it, to my fans."

Halford went on to say: "Look, most of the PRIEST fans drink, but they keep me sober. That might sound crazy. But I have to go out there night after night and do my work in the way that's expected from me. And I can't go out there drunk. I can't go out there smashed and drugged. That's cheating my fans. That's giving them a poorer display. So, if that makes sense, that's also part of my daily spiritual ritual — keeping clean and sober for my own well being, but also for my fans and everybody else."

He added: "For anybody who's listening to us, if you're facing that kind of challenge in your life, please help yourself. You hear all these silly things like, 'Rehab is for quitters,' and, 'You're a man. Have a drink', blah blah blah. If you're going through the same difficulties that I went through, you know that it can be a matter of life or death, quite frankly. So be aware there's people out there, there's great organizations out there to help you start on a path to a brand new life that's full of wonderful things waiting to happen."

Halford previously credited his belief in a higher power for helping him in his recovery. "When I got clean and sober 28 years ago, that was a major change in my life," he said during an appearance on HATEBREED frontman Jamey Jasta's official podcast, "The Jasta Show". "And part of my recovery is just having this higher-power belief. And it works. It works, man. It really, really is important."

Halford added: "There probably will be people listening to [this] podcast who don't have anything like that in their life, and that's great; it's all about acceptance. But I always say to people, if you're thinking about it, the simplest thing I do is I pray. I pray quite a bit, actually. And even if you don't believe in prayer, just have a go. Pray for a good day, or just pray for your friend, or whatever it might be. And it's amazing, man, 'cause it absolutely works. I guarantee, it genuinely does work. And now I'm sounding like [American evangelical Christian evangelist] Billy Graham, but I'm just trying to express some of the things that are important to me on a day-to-day basis that make me able to walk out on that stage each night and do my work."

In an interview with Classic Rock Revisited, Halford spoke in more detail about his decision to quit using substances. He said: "I was sick and tired of feeling sick and tired. I will always remember the first show I did clean and sober… It was in New Mexico, in Albuquerque. I literally felt elevated, as everything was coming with such clarity. I was able to really… enjoy the performance of JUDAS PRIEST without having all of the other things in front of it. Since that day, it has been a miracle."

Halford added, "Everybody has to face things in their lives at some point. It [doesn't have to] be booze and drugs. You can eat too much, or you can not exercise, or whatever… It is not easy staying clean and sober in rock and roll. There are temptations galore from the moment you wake up to the moment you go to sleep, especially when you're on the road. [But] I think we're some of the strongest people, my friends and my sober brothers in metal."