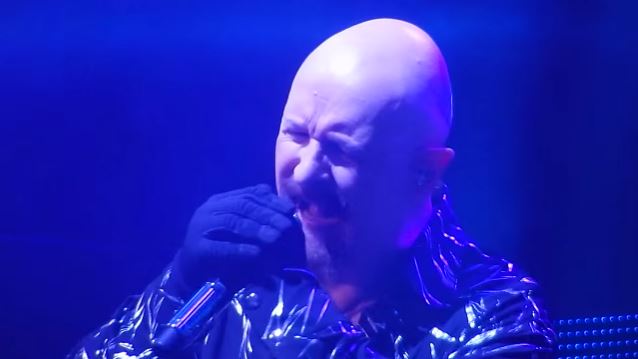 JUDAS PRIEST's ROB HALFORD: 'I'm Lucky In As Far As The Condition My Voice Is In'

In a brand new interview with Pitch.com, JUDAS PRIEST singer Rob Halford spoke about how he has maintained his vocal ability four decades into the band's career.

"I've been doing this for 40 years of my life now," he said. "I suppose before I open my mouth, I already know what I'm supposed to do. [Laughs]

"Wouldn't it be great if that's the way the world was? I suppose a lot of people open their mouths without thinking. I won't go there, but you know what I'm saying."

Asked if he does any vocal training to keep his voice intact, Halford said: "It's just an acquired skill, that you know what key to go for, what tone to go for, what register, how to deliver. It's all just doing it, you know?

"Didn't someone once say that you have to do like 10,000 hours of practice before you get it right? Because with certain things in life, some of the best moments come from doing it over and over and over again.

"I'm lucky in as far as the condition my voice is in. I was well rested before we started recording [the new JUDAS PRIEST album, 'Redeemer Of Souls'], and I think any singer will tell you that when you go into the studio, you hope that your vocal cords are in the best shape that they can be at that time. And I think on this record you let loose because you're just having the best of time. You're excited about the songs and where the band is at and what you're trying to do. It's a combination of a lot of things that should shine in your performance and get corking when the red light goes on."

In a July 2014 interview with the Birmingham Mail, Halford stated about how his vocal performance has evolved over the last four decades: "The voice changes obviously. The trick is just to look after it — don't drink, don't smoke, don't do drugs. I look after my voice these days, and still belt it out.