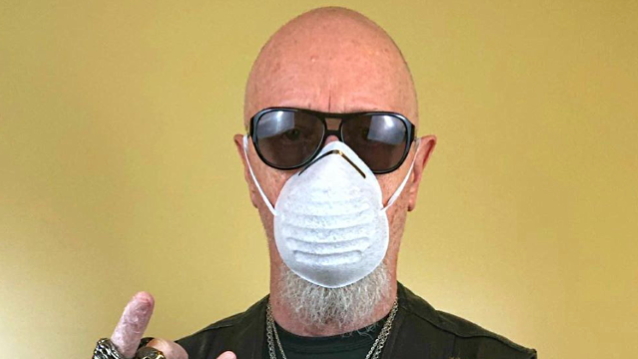 Prior to being canceled due to the coronavirus pandemic, JUDAS PRIEST's spring/summer 2020 European trek was scheduled to kick off on May 30 in Helsinki, Finland and conclude on July 28 in Tilburg, the Netherlands. The band was also slated to headline the U.K.'s Bloodstock Open Air festival on August 9 at Catton Park, Derbyshire.

The U.S. leg of PRIEST's "50 Heavy Metal Years" tour was due to launch September 9 in Oxon Hill, Maryland and wrap up on October 17 in Las Vegas, Nevada. The trek has since been pushed back a full year, to September/October 2021.

Addressing the COVID-19 crisis, which is still ongoing, Halford said (see video below): "We're gonna have to learn to live with this thing. It's like the flu. And this vaccine is just one tool in the way of recovery. But the facts are, believe the scientists, 'cause they are the experts. This is what they do. They are committed to making lives better for people. And the prognosis is that everything should be secure enough for us all to start going out again.

"Whoever made this choice or decision [to push back the PRIEST tour a full year], I think they made the right move, because I think it's gonna be very tricky for bands to try and go out on January the 1st of 2021," he continued. "I think by the summer, everything will be settled, and hopefully the vaccine will have been administered to hundreds of millions of people. I think we'll still have to go through some protocol, which is a small price to pay — getting the temperature done and maybe wear a mask. It doesn't matter. We'll be back with each other again."

Halford's autobiography, "Confess", arrived on September 29 via Hachette Books. Written with Ian Gittins, co-writer of "The Heroin Diaries" by Nikki Sixx, the book charts Halford's rock and roll lifestyle from the late eighties to the band's 50th anniversary in 2020.