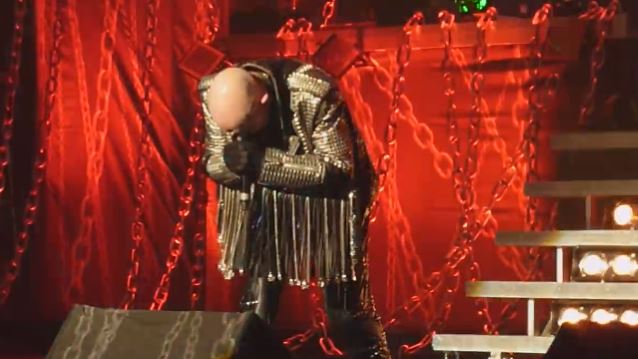 On September 3, JUDAS PRIEST singer Rob Halford called in to "Chaz & AJ", the morning radio talk show program on 99.1 WPLR, a rock radio station broadcasting from Milford, Connecticut. You can now listen to the chat using the audio player below.

Asked what his favorite scream is in all the songs that he record, Halford replied: "Actually, there's a new scream for everybody on the new 'Redeemer Of Souls' album, we have a track called 'Halls Of Valhalla', and there's a little moment in that song where it kind of breaks down and I do this ungodly, unearthly scream and I don't know where it came from. In fact, we kept it from one of the demo rehearsals that we were doing, because it was one of those once-in-a-lifetime things that you do once and you can't exactly get it right again. So check that out, because that's my current favorite heavy metal scream."

Asked if he is still able to pull off the scream every night in concert, Halford replied: "Yeah, I am, I am. And it's one of those things where I love it so much and I am just so stoked by standing on stage still, 40 years later, still screaming my head off and having the time of my life, along with Glenn [Tipton] and Richie [Faulkner] and Scott [Travis] and Ian [Hill]."

In a July 2014 interview with the Birmingham Mail, Halford stated about how his vocal performance has evolved over the years: "The voice changes obviously. The trick is just to look after it — don't drink, don't smoke, don't do drugs. I look after my voice these days, and still belt it out.