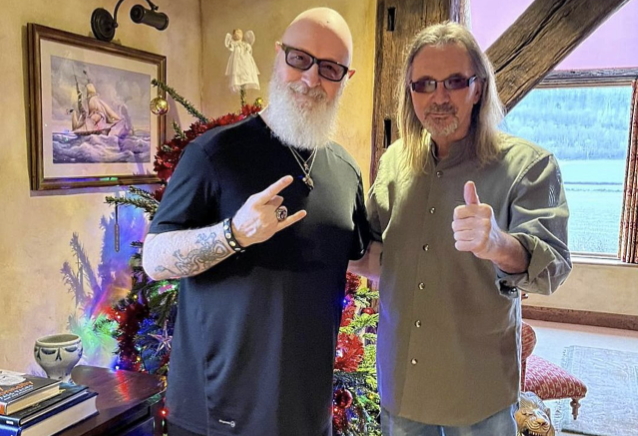 Earlier today, Halford took to his Instagram to share a photo of him with his 74-year-old bandmate, apparently taken at one of their respective homes in the U.K. as they prepare to celebrate the holidays with their families.

Tipton was diagnosed with Parkinson's disease seven years ago after being stricken by the condition at least half a decade earlier. Tipton announced in early 2018 he was going to sit out touring activities in support of PRIEST's latest album, "Firepower". He was replaced by "Firepower" producer Andy Sneap, who is also known for his work in NWOBHM revivalists HELL and cult thrash outfit SABBAT.

When asked in a recent interview with Spain's Mariskal Rock if Tipton will be involved in the recording sessions for PRIEST's next album, Rob said: "There's ways of doing this. Glenn can still play the guitar. He plays it differently, but he can still play. He walked out with us on Bloodstock recently [and played] 'Metal Gods', 'Breaking The Law' and 'Living After Midnight', I think it was. He can play. So he'll be on this next album. Whatever work he does, he's valuable — really important. He's a member of JUDAS PRIEST. He's still there. He's still an important component of this band and what this band represents, particularly in the writing sense. He made a massive contribution to the songs that we have so far. And we'll still keep writing — we'll still keep putting together the ideas. 'Cause you can never not stop writing. The calendar tells you, the label says, 'We would like a record blah blah,' because it takes months to prepare and then months of promotion. And the clock is ticking.

"So, yeah, he's good, man. He's still a fighter. He never lets anything stop him. He's a great force for people that are living their lives actively and productively with Parkinson's. So he's still very much [like] that 'No Surrender' song — a heavy metal hero."