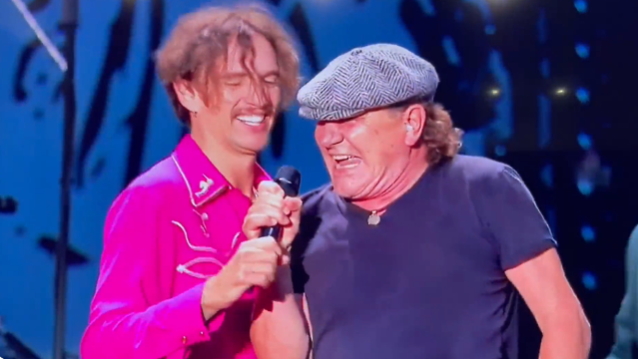 **Update Monday, September 5**: Justin Hawkins has released the following statement regarding his involvement in the Brian Johnson/Lars Ulrich portion of the Taylor Hawkins tribute concert in London:

"10 minutes before the AC/DC segment of the tribute, Brian Johnson asked me to come up and sing the second verse of Back In Black. I initially refused, I've never sung it before and I didn't want it to seem like I was gatecrashing. However, Brian really was insistent and Dave Grohl told me that 'if Brian tells you to do something, you fucking do it'.

"I had Rufus [Taylor, THE DARKNESS drummer] pull up the lyrics on his phone and I gave it a go, but in all honesty I think Brian just wanted to create a memorable spontaneous moment and have a laugh so he could really push on and smash the rest of his set. The stage manager scrambled to prepare a microphone for me, but I didn't know which one I was supposed to take and I ended up having to steal Brian's, which looked a bit awkward.

"Brian Johnson is an absolute legend and Dave was right, I couldn't turn it down."

Justin Hawkins has explained why he took the microphone away from Brian Johnson during the Taylor Hawkins Tribute Concert at London's Wembley Stadium.

The mic handover occurred when the AC/DC singer and METALLICA drummer Lars Ulrich joined the FOO FIGHTERS onstage at the September 3 event to run through a pair of AC/DC classics.

"Please welcome to the stage our good buddy Lars, and Brian Johnson from AC-fuckin'-DC," FOO FIGHTERS frontman Dave Grohl said, as the group kicked into "Back In Black". About a minute into the track, Johnson seemingly motioned to Hawkins, who has no relation to Taylor Hawkins, fresh off his performance with Wolfgang Van Halen earlier in the day. THE DARKNESS frontman then walked out on stage and took the microphone from Johnson, before swapping lines with the legendary AC/DC vocalist.

"Woo, that was fun," Johnson exclaimed afterward. "I enjoyed that. Thank you." Johnson and Ulrich, along with the FOO FIGHTERS, then launched into a version of AC/DC's "Let There Be Rock" before Ulrich came from behind the kit to address the crowd.

"Taylor, I know you're watching," Ulrich said as he prepared to leave the stage. "I know you're hearing this. I know you're feeling this. We fucking love you. On behalf of everybody in METALLICA, nothing but love. Thank you Wembley. We'll see you soon."

In response, one person tweeted, "[Justin] should've gotten his ass kicked backstage for his little stunt during Back In Black", while another fan defended THE DARKNESS's singer, writing: "Brian called him onto the stage!" Justin then got involved the discussion himself, tweeting: "Yeah, 10 seconds before the AC DC section Brian told me to get up for the second verse of BIB. I didn't want to do it, never sung that before but DG said 'if Brian tells you to do something, you fucking do it.' Haha".

A short time later, Wolfgang Van Halen, who received rave reviews for his performance of a couple of VAN HALEN classics, weighed in, writing: "You're goddamn right! And you killed it", to which Justin responded: "Haha I wouldn't say that ;) To be honest, I feel like BJ just wanted to drag me up for a laugh and to give his voice a few seconds to recover in time for the rest of the track. I thought he did an AMAZING job and I'm always happy to help out when needed."

A number of other musicians from around the world gathered in support of Taylor, with various artists playing songs from FOO FIGHTERS' vast catalog.

The concert opened with former OASIS frontman Liam Gallagher performing his band's "Rock 'N' Roll Star" and "Live Forever", backed by the FOO FIGHTERS. Later, Grohl was seen breaking into tears as he performed "Times Like These".

Hawkins died in March in Bogota, Colombia due to a reported cardiovascular collapse at the age of 50.

“If Brian tells you to do something, you fucking do it!” pic.twitter.com/QXJFajur1L

He should've gotten his ass kicked backstage for his little stunt during Back In Black.

Brian called him onto the stage!

Yeah, 10 seconds before the AC DC section Brian told me to get up for the second verse of BIB. I didn’t want to do it, never sung that before but DG said “if Brian tells you to do something, you fucking do it.” Haha

Haha I wouldn’t say that ;) To be honest, I feel like BJ just wanted to drag me up for a laugh and to give his voice a few seconds to recover in time for the rest of the track. I thought he did an AMAZING job and I’m always happy to help out when needed.