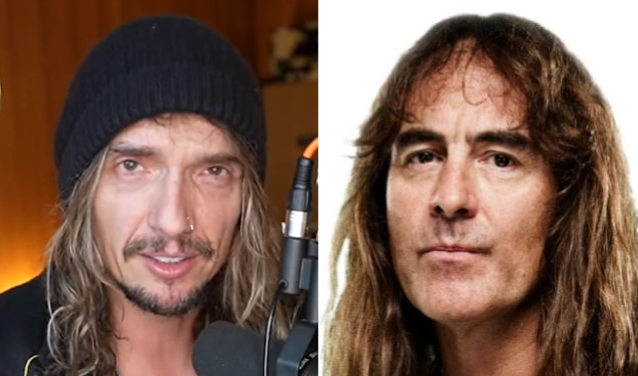 THE DARKNESS's U.K. trek kicked off on November 17 in Brighton and will conclude on December 17 in London.

Asked in a new interview with TotalRock about BRITISH LION's decision to pull out of the tour, THE DARKNESS frontman Justin Hawkins said (as transcribed by BLABBERMOUTH.NET): "It's very important that we remain COVID-free. We don't wanna end up having to cancel shows. So we're testing every day and bubbling very strictly. Nobody's allowed their wives, girlfriends, partners, lovers. So it's very much an insular experience. It's unusual for us; we're normally the party band."

"The thing about BRITISH LION is I think that they were… [Steve] very successful with his other band. We can't afford to walk away from a tour because of disagreement about COVID measures, but he obviously can, and that's their prerogative. I think they're doing their own stuff now. I'm just really pleased that we've got [fellow British rock band] MASSIVE WAGONS on [the tour as BRITISH LION's replacement], who don't mind testing themselves every day. That's all we're asking, really."

When BRITISH LION first announced that it was withdrawing from THE DARKNESS tour, the Harris-led band said in a statement: "Due to circumstances beyond our control BRITISH LION are really sad and disappointed to announce that we will not be able to participate in the tour with THE DARKNESS. Very recently we received their own protocols that are not Government protocols which are completely unacceptable to us. Therefore, we have no alternative but to withdraw from the tour."

Last month, BRITISH LION announced that it would stage its own U.K. headlining tour in November/December 2021.

The band completed its first U.S. tour in January and February 2020.