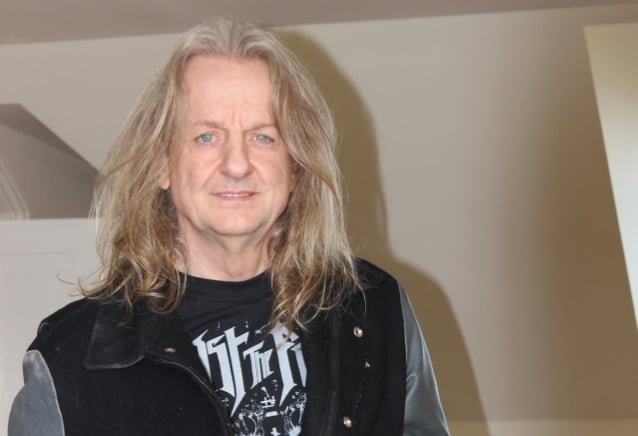 K.K. DOWNING: 'I Feel Very Confident That The True PRIEST Is Within Me'

Founding JUDAS PRIEST guitarist K.K. Downing spoke to Clovis Roman of Brazil's Acesso Music about his autobiography "Heavy Duty: Days And Nights In Judas Priest", which was released in September 2018 via Da Capo Press. Addressing his reasons for telling his life story in book form, Downing said (as transcribed by BLABBERMOUTH.NET): "With the book, I wanted people to get to know me a little bit better. I wanted to try and answer some of their questions — unanswered questions maybe — and I just thought it would be good for me to leave my recollections and memoirs for future people. When they see the videos long after I'm gone, and they hear the songs, they might be interested to know how heavy metal began. Because I was definitely there at the very, very beginning, and I feel very proud and honored to have been a part of the whole thing. And I feel very fortunate to have had the success, but even now still, I feel as though that success is still there and I'm still able to write incredible music and to play really, really well. So I'm really looking forward to everyone experiencing [my new] band [KK'S PRIEST] and giving the fans exactly what the fans want and what the fans deserve, and that is a full-on metal PRIEST. And that's what I am. I was there in the very beginning, and it's unfortunate the way things have turned out. But it's tough to be in a relationship of 40 years or more, but I feel very confident that the true PRIEST is within me."

The 69-year-old Downing recently said that he had "a change of mind" about leaving the band before his exit was officially announced a decade ago.

In recent years, Downing has made it very clear that he wanted to return to JUDAS PRIEST, particularly in early 2018 when guitarist Glenn Tipton announced his decision to retire from touring.

Tipton was diagnosed with Parkinson's disease seven years ago — after being stricken by the condition at least half a decade earlier — but announced in February 2018 he was going to sit out touring activities in support of PRIEST's latest album, "Firepower". He was replaced by "Firepower" album producer Andy Sneap, who is also known for his work in NWOBHM revivalists HELL and cult thrash outfit SABBAT. Tipton occasionally joins PRIEST onstage for its encores, performing "Metal Gods", "Breaking The Law" and "Living After Midnight".

Last year, Downing announced the formation of KK'S PRIEST, in which he is joined by fellow former PRIEST members Les Binks (drums) and Tim "Ripper" Owens (vocals). The band, which pays homage to Downing's past, is rounded out by guitarist A.J. Mills (HOSTILE) and bassist Tony Newton (VOODOO SIX).

In 2019, singer Rob Halford didn't rule out Downing's reunion with PRIEST, saying "what will happen will happen." But bassist Ian Hill has said that there are no plans for PRIEST to invite Downing to return to the band. "Richie took over from Ken," Hill told Riff Magazine. "He's done an absolutely tremendous job, he really has. And he's made Ken's parts his own now. He's got his own angle on the lead breaks. Ken's part's been taken, and there's no plans to have Ken back, really. Hey, listen, never say never. But at the moment, we're going along quite well without Ken, so it could stay like that, I think, at least for the foreseeable future."