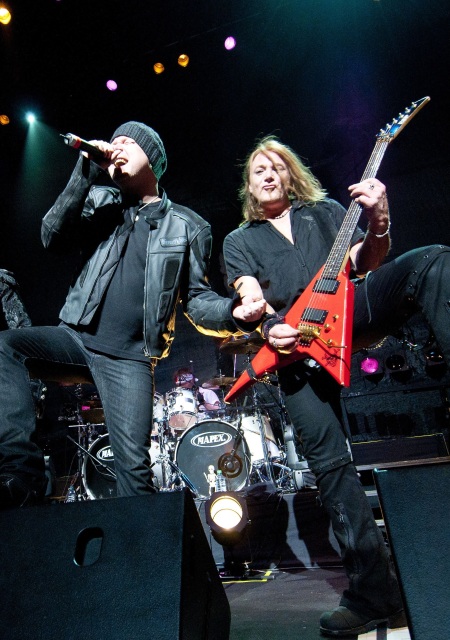 Commented Kiske: "After so many years of abstinence, I had a lot of fun doing my first live shows with UNISONIC in summer 2010, so I agreed to do the short world tour with AVANTASIA. It was a great experience to be on stage with all those great artists, but with Kai it was something different: We instantly felt the magic again and had a lot of fun together on and off stage. We both realized that we want to be together in band again. He was interested in the open musical concept of UNISONIC and finally asked me if he can join the band. I talked to my bandmates and they all felt great about it. His talent as a guitarist and songwriter is an enrichment for the band and we are looking forward to his contribution for the music of UNISONIC."

Kai Hansen will remain a member of GAMMA RAY and play all of the band's currently scheduled shows. He is presently writing songs with the rest of the UNISONIC members for the group's long-awaited debut album, tentatively due at the end of 2011.

A demo version of the "Souls Alive" track from UNISONIC — which doesn't feature Kai Hansen — can be streamed below. The song was first performed at the band's debut concert, which took place on June 5, 2010 at Live Music Hall in Mörlenbach, Germany. The show also marked Kiske's first live appearance in 17 years.

Having split with HELLOWEEN in late 1993, Kiske participated in various projects and released several solo albums but had not been part of a real group effort until now.

While collaborating with Ward and Zafiriou on the PLACE VENDOME project five years ago, Kiske found two musical soulmates. They ended up recording two PLACE VENDOME albums before deciding to join forces in a new brand new band. Ward, who had previously produced a record for KROKUS, suggested Meyer as the perfect addition to the group in the vacant guitarist slot.

Kiske, one of the finest and most unique voices in contemporary rock music, explains his motivation of becoming a part of a band again: "Since the PLACE VENDOME productions I was impressed by Dennis Ward's skills as a songwriter and producer. We were occasionally fooling around since then via email that we should do more together in the future, so the idea came up to do a new band. I was generally getting a bit tired of doing everything on my own for so many years, so it just felt like the right thing to do now. We can all only benefit from working together. No matter how good you are solo, four people will always be better than one, I think, if they manage to function together. And a real band is also a very good reason to finally go on tour again."