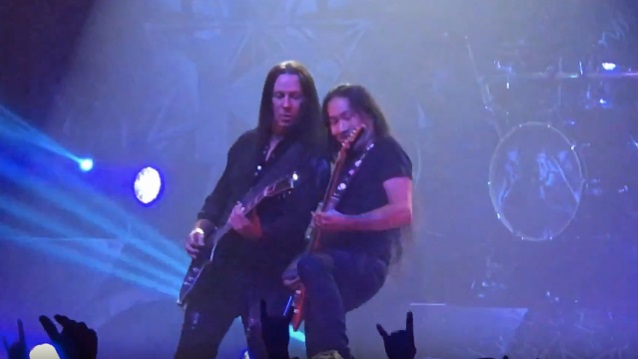 DRAGONFORCE guitarist Herman Li joined KAMELOT on stage last night (Saturday, May 5) at City National Grove Of Anaheim in Anaheim, California to perform the song "Forever". Video footage of his appearance can be seen below.

KAMELOT is touring North America in support of its latest album, "The Shadow Theory", which was released on April 6 via Napalm Records. The follow-up to "Haven" was helmed by longtime producer Sascha Paeth and mastered by Jacob Hansen. Guests on the album include Lauren Hart (ONCE HUMAN),Jennifer Haben (BEYOND THE BLACK) and Paeth. The cover artwork was created by Stefan Heilemann.

New KAMELOT drummer Johan "Jo" Nunez is sitting out the band's current tour after recently suffering a leg injury that is temporarily preventing him from performing live. His replacement for the trek is Alex Landenburg (RHAPSODY, CYHRA),who previously sat behind the kit for KAMELOT in July 2017 when the band supported IRON MAIDEN in San Bernardino, California.

Nunez joined KAMELOT as the replacement for the band's longtime drummer Casey Grillo, who left the group earlier in the year.

DRAGONFORCE will make a number of European festival appearances this summer, starting on June 2 at FortaRock in Nijmegen, The Netherlands.

The band's fifth album, "The Power Within", which was originally released in early 2012, has been completely remastered and remixed and reissued under the title "Re-Powered Within" in Europe via earMUSIC and in Japan through JVC Victor. 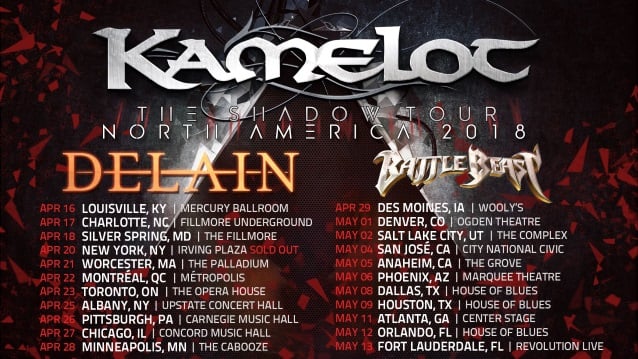