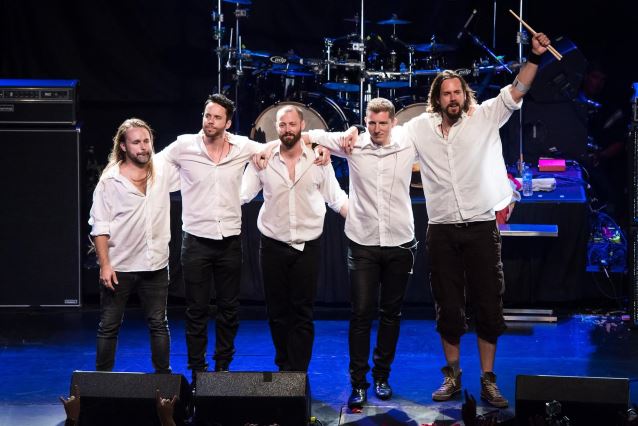 Frontiers Music Srl has announced the signing of the Sweden-based progressive metal band SEVENTH WONDER, which features in its ranks current KAMELOT singer Tommy Karevik, to a multi-album deal!

Originally formed in Stockholm in 2000, the band debuted in 2005 with "Become". The second album, "Waiting In The Wings" — and first to feature Karevik on vocals — followed in 2006. Two more successful records, the concept album "Mercy Falls" and "The Great Escape", followed before the band went on hiatus following singer Tommy Karevik being chosen to take Roy Kahn’s place in KAMELOT.

SEVENTH WONDER is now ready to start again and has plans to return with a live recording and a brand new album to kick things off.

SEVENTH WONDER bass player Andreas Blomqvist states: "It has been too quiet in the SEVENTH WONDER camp for far too long — and FINALLY that is about to change! Many years have passed since we last put out a record but, finally the band is a fully functioning unit again, ready to create some great new music.

"As we were getting ready to get back on track we also needed somebody to partner with — somebody who shared our vision for the band and saw our potential and was willing to commit to the band. We have found that somebody in Frontiers!

"We are thrilled to be on board with such a famous label with many of our favorite bands on their roster.

"You, the fans, have been more patient than anyone could ever deserve. We are equally proud and humbled by that and we promise to do our best, together with our new friends at Frontiers, to make up for the years of silence by going full speed ahead. And you know what? The new album is sounding great!"

The first taste of new SEVENTH WONDER music is due in the fall, with the new album expected to be released in the first half of 2017.

After he was officially announced as the new KAMELOT singer in June 2012, Karevik stated about his position in SEVENTH WONDER: "I will not leave SEVENTH WONDER! The SEVENTH WONDER guys and all of you fantastic and supportive fans out there will not get rid of me so easily! I love you all and you are the reason I got to where I am today! We are already working on some stuff for the next SEVENTH WONDER album and really can't wait to show it to you all!"