KAMELOT has tapped drummer Alex Landenburg (RHAPSODY, CYHRA) to sit behind the kit for the band's July 1 performance at Glen Helen Amphitheater in San Bernardino, California as the support act for IRON MAIDEN. He will be filling in for KAMELOT's regular drummer, Casey Grillo, who is currently on the road with QUEENSRŸCHE.

Grillo made his live debut with with QUEENSRŸCHE on April 1 at Sycuan Casino in El Cajon, California. He was recruited as the temporary replacement for QUEENSRŸCHE drummer Scott Rockenfield, who is taking time off from the band's touring activities to spend time with his newborn son, appropriately named Rockson.

KAMELOT will return to North America in April/May 2018 to support their upcoming album on Napalm Records. The new offering will be released in early 2018 and the first tour behind the disc will see the band performing in the United States and Canada, bringing their biggest production and package in the group's history. The tour will venture north and into Canada before extending through the Midwest, ultimately reaching the West Coast before circling back to the South, capping it off with a huge Orlando and Fort Lauderdale finale.

Joining KAMELOT and bringing their unique brand of symphonic metal to the tour are very special guests DELAIN from The Netherlands. Rounding off the package for a metallic triple punch are Finland's own BATTLE BEAST.

KAMELOT's latest album, "Haven", sold around 7,600 copies in the United States in its first week of release. The CD was made available in May 2015 via Napalm Records as part of an exclusive licensing deal through the band's Kamelot Music LLC. 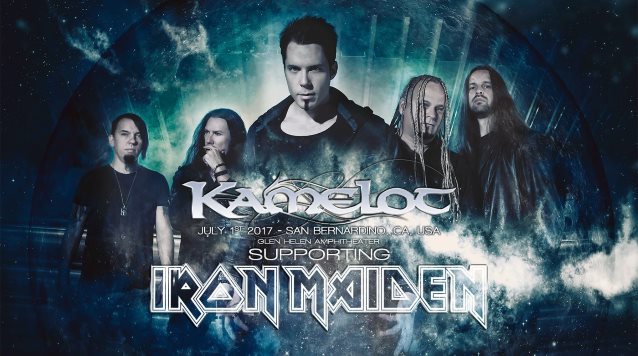