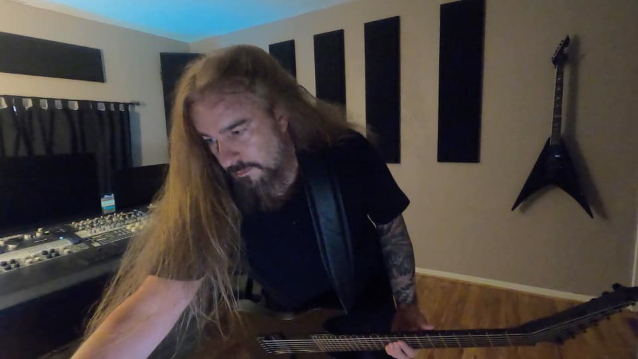 KATAKLYSM Guitarist Is Feeling 'Much Better' After Testing Positive For COVID-19: 'It Is A Nasty Bug,' He Says

KATAKLYSM guitarist Jean-François Dagenais says that he is feeling "much better," less than a week after tested positive for COVID-19. The Canadian-born musician, who has lived in Dallas, Texas, for the past decade, exhibited "severe symptoms" of the novel coronavirus before it was confirmed he had COVID-19.

Earlier today, Dagenais released the following statement: "Hey, folks! First, I want to thank everyone for the outpour of support from all our awesome fans and music colleagues around the world. It really gave me a morale boost!

"Last week started like any normal week. I was doing press for KATAKLYSM's new album, 'Unconquered', and on Wednesday morning, I woke up and felt like I got hit by a train; I had a slight fever, body aches, and very low energy. The next day, I went to my doctor after no improvement and they administered the COVID test to be on the safe side. It came back positive, and I was shocked because I'm the extra-careful type of guy. I wear a mask religiously, wash my hands, and barely go out.

"Anyhow, over the weekend I started to feel much better and started feeling like my old self again. Luckily, I am in decent health with no underlying conditions. I will self-quarantine at home with my family (so far they are fine) and will be free of this thing in no time.

"I don't want to make a big thing out of this and overshadow the new album, but wanted to share the news that anyone can get this so be careful out there. It is a nasty bug. The first few days were brutal, but at the end of the day, I'm fine, and I will get over it."