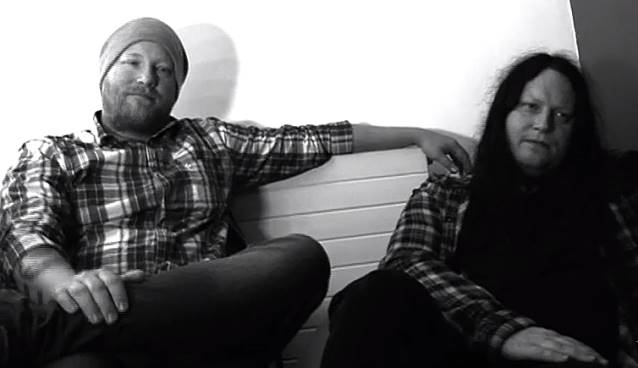 Heavy Metal Artwork conducted an interview with Swedish dark rockers KATATONIA before the band's November 3, 2013 concert at Roundhouse in London, England. You can now watch the chat below.

KATATONIA recently supported PARADISE LOST on the "Tragic Illusion" 25th-anniversary tour alongside LACUNA COIL. Concurrently, also celebrating their own 10th anniversary for their masterful sixth album "Viva Emptiness", KATATONIA performed the album in its entirety each night to make these shows even more special.

"Dethroned And Uncrowned" is KATATONIA's debut album on Kscope (sister label of Peaceville),home to ANATHEMA, AMPLIFIER, STEVEN WILSON and most recently, WISDOM OF CROWDS, the new project from Bruce Soord of THE PINEAPPLE THIEF and KATATONIA's very own Jonas Renkse.

"Dethroned And Uncrowned" was released on September 10, 2013 in North America to celebrate Kscope's fifth anniversary.

The album was funded by a successful PledgeMusic campaign that helped make the recording possible.

Anders Nyström (guitar/vocals) commented, "The synopsis is simple and album title [doesn't] lie; the drums [were] dethroned and the distorted rhythm guitars [were] uncrowned! Instead, we place[d] the emphasis on the many layers of ambience, with the melodies staying central and the vocal harmonies representing the heart of the album.

"Think of the album like a person's face in the hands of a surgeon, whose appearance is gonna change, but it's still the same person behind that face and we guess an important factor, in this case, would be that the surgeon itself is obviously KATATONIA, not a stranger! If there's one album in our repertoire that's suited for a thing like this, it's 'Dead End Kings'."