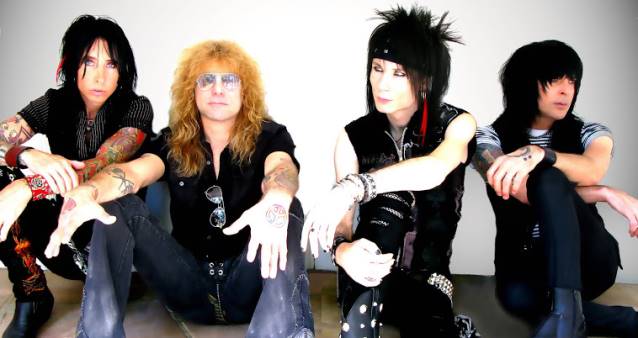 ADLER Has Not Broken Up, Says Singer JACOB BUNTON

Asked for an update on ADLER's current status, Jacob told RadioScreamer (see video below): "We haven't broken up. We had to cancel the tour, obviously, 'cause Steven had to concentrate on himself, and that's priority No. 1. We love him; he's our brother and we want him to be healthy and staying at home. For the meantime, it's healthier [that way]. And maybe one of these days we'll be able to do some shows, or whatever. But nah, we haven't broken up, and he's our brother."

He added: "Obviously, from where we stand, it was an absolute honor to play with somebody that was in our favorite band of all time. Not only Steven — we also played with [former GUNS N' ROSES bassist] Duff [McKagan], we played with [ex-GUNS N' ROSES guitarist] Slash; three-fifths of the original GUNS N' ROSES. It's like, when you are a kid, you can never even dream of doing something like that. You're just, like, 'Wow!' It's crazy."

ADLER's debut album, "Back From The Dead", which was released in North America on November 26, 2012 via New Ocean Media. The CD was recorded in Los Angeles with producer Jeff Pilson (FOREIGNER, DOKKEN) and was mixed by Jay Ruston (ANTHRAX, STONE SOUR). The effort consists of 11 tracks, ranging from adrenaline-pumping rockers ("Back From The Dead", "Own Worst Enemy", "Another Version Of The Truth") to arena-rock anthems ("Good To Be Bad", "Blown Away") to powerful, heartfelt ballads ("Waterfall", "Just Don't Ask"). The album features a guest appearance by Adler's former GUNS N' ROSES bandmate Slash.

ADLER's "The One That You Hated" video: