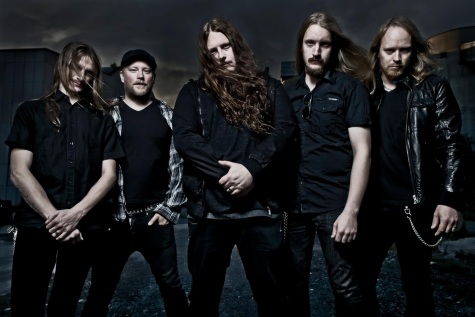 KATATONIA To Enter Studio On Monday

"It's been a busy time lately and the hard work has finally paid off. We have now thirteen songs in the bag, and hey, that means the recording of our new album can and shall begin. We're starting with the drums on Monday and we'll be once again work together with David Castillo (who engineered and mixed 'Night Is The New Day'),so even though we always strive to improve our productions, it should sound sweet that it's the same team putting this one together, just throw in some new gear, gadgets and toys with that! The recordings as well as the mix will be divided between Ghostward and our own HQ over the next month and we'll keep you posted on the progress.

"So, what does the material sound like? Well, you got the lush textures, the moody melodies, the heavy parts, the progressive touches, the mellow bits and so on... Is it metal? Is it rock? Is it alternative? Is it singer/songwriter? Actually at times it feels like we're exploring territories where KATATONIA would be an orphan in the land of 'genres.' We can't tell where and to whom we belong and the goal is that it doesn't even matter, because before and above any genre there's first an acceptance level of music being good, or being bad. KATATONIA might be bad people, but we create good music. Amen.

"We also hooked up again with keyboard maestro extraordinaire Frank Default and regardless of the internet speculations, he's not to 'blame' for the increased use of electronics since the last album. That part has been called for as we simply feel that it has grown to fill a hole in our sound inside, or alongside, the classic formation of instruments. In our world, we allow mellotrones, Hammonds, rhodes and strings to integrate with loops, distortion and filters to manifest in the katatonic maelstrom. It's our time to marry contemporary with vintage. Here's our ninth album to be delivered!"

KATATONIA played four shows in Scandinavia in December, hitting the capital cites of Copenhagen, Oslo, Helsinki and, of course, the band's hometown of Stockholm. The concerts, which were part of the 20th-anniversary "Last Fair Day Gone Night Tour 2011", saw the band perform two sets. The first set consisted of a performance of the entire "Last Fair Deal Gone Down" album front to back. The second set was a mixture of carefully picked songs from the band's extensive catalogue.

KATATONIA's May 6, 2011 concert at Koko in London, England was professionally filmed/recorded for a future DVD release.

KATATONIA released special editions of the critically acclaimed albums "Last Fair Deal Gone Down" and "Night Is The New Day" on April 25. The 10th-anniversary edition "Last Fair Deal Gone Down" was presented in deluxe mediabook packaging, as a two-disc edition containing tracks from the now hard-to-find singles "Teargas" and "Tonight's Music". The reissue of 2009's "Night Is The New Day" includes bonus tracks from the "The Longest Year" EP. Both titles were presented with newly updated cover artwork courtesy of original artist Travis Smith.