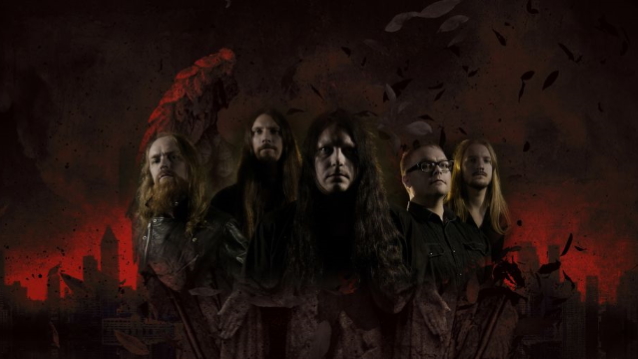 KATATONIA, the Swedish purveyors of dark progressive rock/metal, will release their new album, "City Burials", on April 24 via Peaceville Records. The disc's first single, "Lacquer", can be streamed below.

Guitarist Anders Nyström commented: "In days and nights of black and silver, the dead-end king will come. From pieces of broken mirrors there will be a crown bestowed upon his head. In reflections of shattered glass not only the seasons will turn, but also the change disguised by the lapse of time. His mind will have to come to bear the weight of everything that was left behind and forgotten. Archiving the inaccessible. Celebrating the abandoned and mourning the destroyed. The city burials."

With the winds of a new direction steering the band on their latest journey, "City Burials" stands as KATATONIA's new triumph of deep and enigmatic progressive rock — the fruits of a rejuvenating and profound chapter in the band’s legacy; a catalyst for its creators, with a collection of moments constructed out of the fragments of an ever-evolving life. Compiled into one of their most important modern works and statements to date, the finely honed instrumentation provides a multi-textured backdrop with the voice of Jonas Renkse guiding us through these latest trials of loss and ruin.

"City Burials" is an album that sees the band reclaim part of their heavy metal roots, via several moments of exuberant, old-school classicism, deftly woven into these new songs' kaleidoscopic fabric.