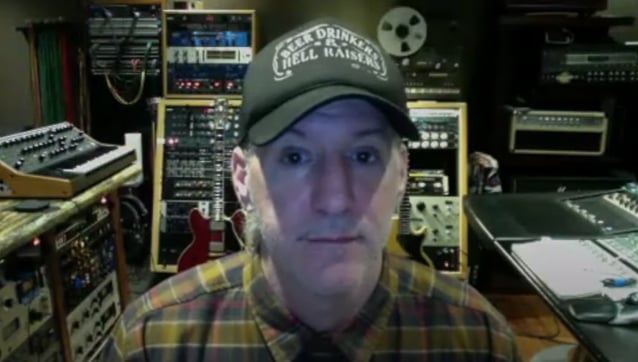 Former BUCKCHERRY guitarist Keith Nelson was asked in a new interview with Everyone Loves Guitar to name the top three takeaways from his entire experience of playing with the Californian rock outfit for two decades. He responded (as transcribed by BLABBERMOUTH.NET): "Never make an artistic decision based on finance. You don't wanna let the business side dictate what you do as an artist — from the songs you write to the records you make to the show you put on. Our best decisions were always based on the purity of the intent of the music, and our worst decisions were made for financial reasons and dictated by that.

"One of the things I always young bands [when they ask me], 'You have any advice for us?', I'm, like, 'Yes. Make sure that you love what you're doing, because at the end of it…' Because you're on a bus with guys, eventually they're gonna get on your nerves," he continued. "It's inevitable. It's not rainbows and unicorns flying out of your butt every day. At the end of the day, you get in an argument with your girlfriend, [you're] away from your home, you didn't make as much money as you thought… Life stuff is gonna happen. If you don't really, really love making the music and doing it, it's a long, hard road. The solace that I always found, no matter what was going on in life, inside or outside the band, is that I always loved doing it, and it was the savior of the whole thing. 'Cause if my motivation would have been, 'I just wanna make a lot of money,' it wasn't like that all the time… 'Cause being in a successful band is a lot of work. It was a lot of work. And I don't take it lightly, and I'm absolutely grateful for all of that, but it's a lot of work. You have to be all in and dedicated — at least from my experience of it. I think there are people that can be not a primary member of a band and ride the wave and enjoy it, but for me, in the engine room of it, you've gotta be all in.

"You asked for three takeaways. There's two. [The third is] always bet on yourself," Keith added. "Go with your gut. Bet on yourself."

Nelson's departure from BUCKCHERRY was announced in May 2017. At the time, no reason was given for his split with the group. He was replaced by Kevin Roentgen, who had previously played with AMERICAN PEARL and SOUL. Roentgen left BUCKCHERRY in July 2020 and was replaced by JETBOY's Billy Rowe.

In a December 2019 interview with "Trunk Nation: L.A. Invasion" on SiriusXM, Nelson stated about his exit from BUCKCHERRY: "I never actually spoke of my reasons [for leaving], 'cause it wasn't just one." He added: "I'm really proud of what I did. We achieved a lot — way more than we thought we could — and I have no hard feelings. I'm just moving forward."

BUCKCHERRY singer Josh Todd told the "Appetite For Distortion" podcast that things "got really weird" in the three years prior to the departures of Nelson and drummer Xavier Muriel. "It just wasn't a band anymore. We weren't aligned; we weren't all focused on the same things; we didn't all want the same things," he said. "Everything happens for a reason, and it's been nothing but great things for all of us. I can't speak for Keith or Xavier, but I just hope that they are really happy in their lives. That's all I care about, really, because at the end of the day, that's all you want for people. I can't harbor resentment or anger towards anybody. At the time, there was a lot of stuff that rubbed me the wrong way, but since then, I've really worked through it a lot, and now, looking back, it just needed to happen. Now, everything's really amazing. With every lineup change in BUCKCHERRY's history, it's always gotten better, so I had that to kind of reflect on when all this was going down, so I was just optimistic about the whole thing."

In March 2019, Todd said that he had yet to rekindle his friendship with Nelson, despite the vocalist's attempt to bury the hatchet. "I can tell you this. I really gave him an opportunity to set himself up for that, and he didn't take that opportunity," Todd said. "I can only personally tell you that I've done a lot of work on the subject and I can say this that I hope he's happy, and that's it. And I hope everybody who's had any kind of issue with [BUCKCHERRY] and had to leave is happy, 'cause that's all that matters at the end of the day. I don't hate him and I don't hate anybody."