Kelly posted a strongly worded message on social media in which she said she was "hurt" by the comments about her parents' marriage, and called the reporter "shady".

"Sorry but I just had to say something," Kelly wrote. "My father and I watch KTLA News every morning together. To say that I am blown away by your comments on my parents marital status is an understatement."

Kelly continued: "As you reported, he is about to undergo a life changing surgery on his back that will determine the rest of his life," she continued.

"The fact that everyone could not just wish him their best and instead made such cutting comments is shameful. Is it hard for you to just be nice? My weather report is that you are shady."

Although Kelly didn't specify which comments she was objecting to, a YouTube clip of KTLA's report on Ozzy's surgery features anchor Dayna Devon offering a brief update on the singer's latest medical issues following by reporter/weathercaster Kacey Montoya asking her if Sharon and Ozzy ever separated. After Devon responded that the couple "had a minute" after "he had an affair" but that they "worked it out," Montoya can be heard saying, " And now she's gonna take care of him" after his surgery.

Two years ago, Ozzy said that he was "terrified" Sharon would leave him after she learned of his extramarital affairs.

After Ozzy's affair with celebrity hairstylist Michelle Pugh was made public in May 2016, he underwent therapy for sex addiction. Sharon and Ozzy later reconciled and they even renewed their vows.

Back in 2017, Sharon told the British paper The Telegraph that Ozzy wasn't cheating with just one woman. "There were six of them," she said. "Some fucking Russian teenager... then a masseuse in England... our masseuse out here in Los Angeles... and then our cook. He had women in different countries. Basically, if you're a woman giving Ozzy either a back rub or a trolley of food, God help you."

Sharon talked about how she learned of his affairs. "We were sitting on the couch watching telly; Ozzy on one couch and me on the other," she said. "And suddenly, he sends me this e-mail. 'Why did you send me this stupid e-mail?' I asked, and when Ozzy told me that he hadn't sent me anything, I grabbed his phone and said, 'Look!' And, of course, it was a message meant for one of his bloody women."

Ozzy was scheduled to undergo surgery on Monday (June 13) to remove and realign pins in his neck and back.

The BLACK SABBATH frontman suffered injuries during a quad biking accident in 2003, exacerbated in 2019 by a fall at his Los Angeles home that required 15 screws to be inserted in his spine. 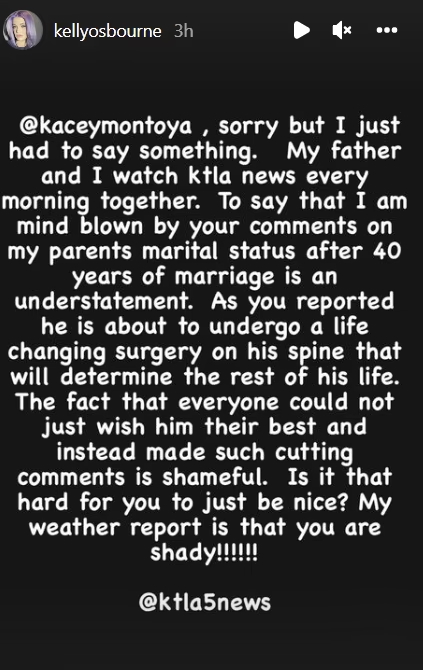